Album Review: Hold The Fight – With A Breath & A Hope 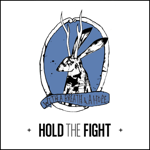 Hold The Fight are just shy of turning three this year but upon listening to newest release ‘With A Breath & A Hope’, you’d be forgiven for thinking that this Eastbourne trio had been going for far longer than that. With a rather assured sound, their mini-album had us interested from the opening chords.

‘How Many Times Man, I’m Not Caesar’, their official single, kicks off proceedings with a flurry of strong drum work for a split second before incredibly clean vocals join in with the mix. Gang vocals chime in above their eclectic riffs, making the opening single start the album with a bang.

‘Eleanor’ and ‘Baby, You Be the Architect’ are but another two examples of tight musicianship. The bassline is a well-crafted piece of melody, helping to display Hold The Fight’s well-placed enthusiasm and energy. ‘Who’s Game For Another One Line Adventure’ couples spiky riffs with blistering drumming. With both guitarist Laurie and bassist Will providing vocals, they bounce off each other, giving each track more depth.

‘We Will Sink Your Battleship’ sinks its teeth into the listener, as it starts off with gang vocals before giving way to a lone voice layered over slick riffs. Closing the album with ‘Face It Kid, You Can’t Build a Bridge With Algebra’ (a rather quirky title, but a bit of a mouthful), Hold The Fight have given their fans a stellar mini-album. Whilst it’s a well-produced, enjoyable piece of work, the vocals become rather tedious on our hearing after a while.

Whilst it’s a well-produced, enjoyable piece of work, the vocals become rather tedious on our hearing after a while and there’s something about just how polished the album is that sets us on edge. If you’re going to describe yourself as a pop-punk/hardcore band, you’re going to need to produce music that’s a bit more raw and abrasive.

Yet all in all, an excellent effort. Well done lads!

‘With A Breath & A Hope’ by Hold The Fight will be released on 11th March on Nothing But Love Collective.