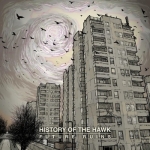 Being part of In At The Deep End Records, it’s no surprise that History Of The Hawk‘s début album, ‘Future Ruins,’ is a chaotic juggarnaut of a record that grabs hold of you tight from the start and doesn’t let go for 25 frantic minutes.

With a majority of the songs coming in at just a minute and half, ‘Future Ruins’ isn’t exactly a record that dwells on its ideas, yet History Of The Hawk’s relentless energy and hunger throws everything into the mixing pot: heavy riffs, hardcore screams, punk rock drumming and a slight undertone of experimentation.

Throughout short, sharp blasts such as ‘Descending Light,’ ‘Ex Wives’ and ‘Hey Ghost, the Myth About Science is’ the quintet deliver on expectations, as History Of The Hawk are a highly intense band that stick to their guns and avoid any form of melody or hooks.

Admittedly the bands direct style can come tiresome at times as one track fails to differ from the next, but it’s the bands sheer momentum and energy that manages to keep you interested until the end.

If you’re a fan of heavy, noisy hardcore then History Of The Hawk will more than likely appeal to you but if not, than you’re going to struggle to grasp what this Stourbridge group are trying to set out to do. Nevertheless ‘Future Ruins’ is an admirable, frantic, direct record that doesn’t slow down for one second.

‘Future Ruins’ by History Of The Hawk is available now on In At The Deep End Records.

History Of The Hawk links: Facebook|Twitter