Album Review: Hell Or Highwater – The Other Side 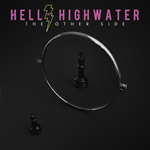 A lot can change in just six years. Six years ago last month, Atreyu released ‘Lead Sails Paper Anchor’, arguably the strongest album of their 13-year run. At the same time, fellow Californians Avenged Sevenfold delivered their self-titled fourth album to the world, taking a further step away from their more metalcore roots into a more hardened sound that could turn them into giants. Six years on, and while Avenged Sevenfold top the US and UK charts with ‘Hail To The King’, communications from the Atreyu camp have long since gone dark. With the band going on hiatus in early 2011, each member was freed up to pursue their own, separate projects. One such project saw drummer/vocalist Brandon Saller unite with three others under the new banner of Hell Or Highwater. Now, off the back of the band’s debut album ‘Begin Again’ that dropped back in February as an explosive statement of their arrival, we have its follow up in their new EP, ‘The Other Side’.

If ‘Begin Again’ hadn’t highlighted it enough, ‘The Other Side’ makes it perfectly clear that time has changed Saller in his post-Atreyu ventures in a way particularly similar of that which saw Avenged Sevenfold evolve from gritty metalcore outfit into stadium-filling mastodons. ‘Moment of Clarity’ wastes no time in taking this fact and beating you around the head with it; while Atreyu never struggled to harness a “huge” sound, Hell Or Highwater have taken this ability, polished it and employed it from day one as integral to their game plan for serious, attention-grabbing rock. The EP’s title track ‘The Other Side’ follows, seemingly undecided as to whether it would rather be a ballad or an anthem. It is, however, a very powerful track that should get no shortage of listeners juggling backing vocalist and air guitarist duties. ‘Wrong’ packs a similar towering sound, harnessing the combined strengths of Saller himself, as well as guitarists Matt Pauling and Neal Tiemann, with bassist Joey Bradford and drummer Captain Carl rounding out the quintet. Each part of the five-piece is on ferocious form by the EP’s middle track, and slowing down seems particularly out of the question.

‘Remember The Life And Not The Death’ takes you by surprise somewhat in its intro, the fully-vocal opening bars would seem more at home on a power metal album, and for a second on first hearing them I wonder if I’ve accidentally started blaring out Avantasia by accident. That route is hurriedly bricked over, however, and the track quickly rips off the mask to show its true face as the EP’s token anthem, soaring guitars and vocals that showcase Saller at his most intense. No screaming is needed to make the track a heavy-hitter. It’s tracks like ‘RememberThe Life…’ that save Hell Or Highwater from becoming bogged down in the shadow of Atreyu. There is a lot more to the quintet than that, and along with ‘Begin Again’, ‘The Other Side’ has ensured that 2013 serves as the proof the potential is there for the band to even outshine the backburnered alt-metal band.

Just how ‘Drowning In The Waves’ dodged the tracklist to February’s full album release is a mystery. It would have been one of the record’s standout highlights for sure, but being included on the new EP instead does nothing to pull the spotlight off the track. Each element of Hell Or Highwater is allowed to shine in its own right, and you can’t really ask for anything better to wrap up the five-track release. And of course it’s going to be compared to Atreyu, at this point that’s borderline inevitable, especially with Saller’s voice playing such a major part. But if, after the comparisons, you don’t stop to appreciate Hell Or Highwater for their own strength, then you aren’t taking them seriousl enough. Time after time a musician breaks away from a successful band and any ensuing project sees them almost typecast. No-one knows Chester Bennington simply for his Dead By Sunrise work, and even when working with Slash, Myles Kennedy is still “that guy from Alter Bridge” to many. But this can prove the exception. Brandon Saller can be far more than “that guy from Atreyu”, and Hell Or Highwater can be far more than a flash in the pan. Whether their promise can be capitalised upon, and just what 2014 holds in store for them, well, that remains to be seen.

‘The Other Side’ by Hell Or Highwater is out now on Pavement Entertainment.