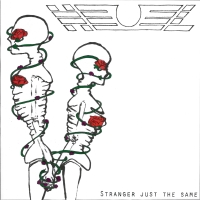 It’s an ambivalent EP with which Heel follow up their debut self-titled effort, and the band seem determined to branch out away from any particular labels while still attempting to position themselves alongside the bands that have influenced them so heavily. That said, the four-track release still stays true to its roots and while it is so very pop-rock, the kick that each track possesses is enough to ensure that the record does boast a significant cool factor. With the state of pop-rock the way it is, that is already a convincing point in favour of the quartet.

There are cracks in the surface, however. ‘Stranger’ and ‘Gone’ arguably showcase the four-piece at their most promising, though at the same time the two tracks are allotted the least amount of time out of the four that make up the late July release. If not for the four and a half minute ‘We’ll Fall Back in Love’, you’d question whether Heel had enough self-confidence to deliver at least an average-length song. After the punchy introduction to the EP offered in ‘Stranger’, and the inescapably pogo-inducing nature of ‘Gone’, it seems that ‘We’ll Fall Back in Love’ sees the record’s cool factor take a brief respite, and as the song title suggests it wouldn’t seem remotely out of place in a clichéd teenage romance movie, perhaps starring Hilary Duff or Meaghan Martin. Luckily, everything slots back into place to wrap the EP up with ‘Not You’; the attitude returns, the instrumentals regain their punch and there’s far more passion in the whole ensemble.

Filling the Smash Mouth-shaped void as the musical mainstay of tired high school comedies is not a career choice that does justice to the potential that Heel clearly have at their disposal. It’s a definite pitfall to avoid, but luckily evidence suggests that the quartet won’t be typecast to such a role. Despite any reservations, in ‘Stranger Just the Same’ Heel have cracked out a sophomore EP to be proud of. From here the London outfit can make the most of a touring cycle that could see them into next year, and from there a full-length album can’t be far off. It’s that which will make clear just where the road leads for the pop-rock four-piece, but right now signs are pointing in a promising direction for a band to certainly keep on your radar as they prepare for a UK tour. At the very least, it is highly unlikely that this will be the last you hear of Heel. For better or worse.

‘Stranger Just the Same’ EP by Heel is out now.