Album Review: Have Mercy – A Place Of Our Own 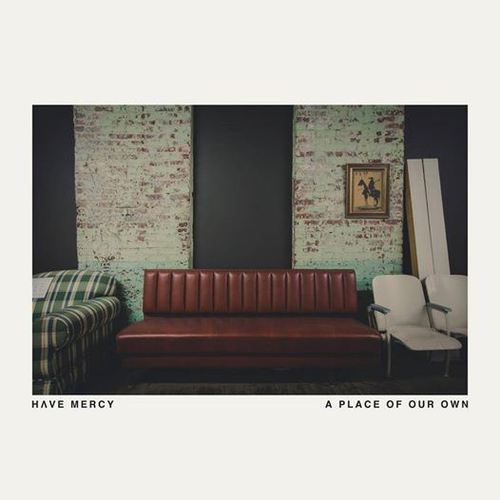 At the turn of the year, Baltimore’s Have Mercy were gathering much momentum off the back off last year’s ‘The Earth Pushed Back’ and they were being labelled as one of the many up and coming US acts to watch out for in 2015. So it is no surprise they were picked up by Hopeless Records earlier this year, and now they’ve released their label debut – ‘A Place Of Our Own’.

On first listen the quartet fit quite snuggly into the “emo revival” mould albeit a more polished, alt-rock one. Nevertheless ‘A Place Of Our Own’ is a refined effort that both soars during its uplifting moments and tugs at the heartstrings at its more delicate times. Opening with the short-yet-effective ‘To Convey’, vocalist Brian Swindle strums alone before being joined by the rest of the band as he proclaims “I remember your hands at my throat, a sweet reminder how you’ll never let go. To convey: is this the best way you know?”. After that intro-like number, ‘Two Years’ introduces the bands tendency to become introspective; “I had a life and I had friends. I miss all of them.” Whilst musicialy the bands vibrant, well-executed and emo alt-rock style is reminiscent of The Dangerous Summer, latter-day The Starting Line and Jimmy Eat World, yet with Swindle’s passionate yells gives Have Mercy a sense of urgency and originality.

Recent single ‘Howl’ keeps up the momentum with its steady tempo and subtle pop melody whilst ‘Pete Rose and Babe Ruth’ draws you in with its punchy drums, stirring guitars and radiant chorus with Swindle’s strong songwriting adding to the tracks strength. Lyrically ‘A Place Of Our Own’ doesn’t tend to stray far from the themes of complicated relationships (see ‘Spacecrafts’ and ‘Plastic Covered Furniture’) yet the bands delivery is thoroughly effective and is pulled off in a comfortable fashion.

Elsewhere songs such as ‘Pawn Takes Rook’ display Have Mercy’s growth in confidence as a band with Swindle especially coming across stronger vocally as he screams “It’s a goddamn shame”. Whilst ‘Nails and Teeth In Pavement’ is a more dense, layered number with cathartic guitars complimenting the downbeat nature of the song.

The album is rounded off with ‘Lean’, a more edgy number that fits in with the Citizen/Balance & Composure comparisons Have Mercy have received. With its dark, steady tempo, the track allows Swindle’s raw vocals to take the spotlight. It ends the album on an emotionally-charged high.

Whilst ‘A Place Of Our Own’ brings about reminders of several bands, Have Mercy are far from being intimaters of those mentioned, as this sophomore effort serves it purpose of showcasing their musical and lyrical growth. However they don’t excel themselves by abandoning the characteristics that led to receiving much praise with their first effort. At it’s core ‘A Place Of Our Own’ is just as rooted in its emotional songwriting as its predecessor, yet the loose ends have been tightened up by the bands natural growth and the appreciative production work of Paul Leavitt.

‘A Place Of Our Own’ by Have Mercy is out now on Hopeless Records.