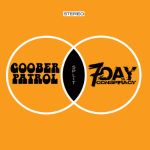 Goober Patrol kick things off to a good start with ‘That’s the Point’, a great anthem about the state of music today, declaring “punk rock has lost its shock, diluted for the masses”. So it’s a shame that after such a promising start that the rest of their offerings on ‘Split LP’ vary from boring to downright annoying. Sounding a little bit like Cocksparrer in delivery (bar the England Belongs to Me-type bigotry), any of Goober Patrol’s songs could have been written by a 1970’s punk band, and ‘Tory’ (which has a seemingly endless refrain of “He’s a Tory”) only remains up-to-date by a reference to “sick of paying for your-second home”.  Goober Patrol’s music is full of these kinds of repetitive, chanting lyrics, the kind of songs that sound great when you’re pissed because they’re easy to follow along with, but quickly become irritating when heard multiple times. ‘Coconuts’ does exactly what it says, barking the lines “Have you seen my coconuts?” over and over (it concludes that they haven’t seen them, in case you were concerned). This is the kind of lyricism that even Reel Big Fish or NOFX would be unlikely to touch, and at least they’d throw some horns in to apologise. ‘Man of the People’  does in fact throw in a mix of instruments, including an accordion and what sounds like a kazoo to switch things up, but it’s not enough to beg repeat listens.

Unfortunately, 7 Day Conspiracy’s section isn’t much better. The main issue is that both bands sound incredibly similar, so instead of bringing something different to the table, the songs are more or less interchangeable.  7 Day Conspiracy tracks are slightly less abrasive to listen to, with some more harmonious melodies and ‘The Mill’ even has a nice piano introduction. However, just when you think you’ve escaped the sounds of pissed-up blokes shouting at you, they choose to close the album with ‘Berkshire Hunt’, which, if you aren’t adept at rhyming slang, just features the lines “You’re a cunt” repeated over and over. Actually there are some verses in there too, but they’re drowned out by the cunt declarations, kind of like trying to listen to music through headphones on a packed train carriage heading back from an Arsenal game.

If you want punk music for being obnoxiously drunk to, this is for you. It’s shouty and simplistic, like a drunk that gets stuck in a loop and repeats the same thing over. I guess you could say its music for Berkshire hunts.

‘Split LP’ by Goober Patrol and 7 Day Conspiracy is out now on Bomber Music.