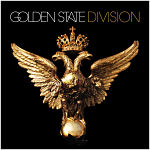 When it comes to music, California has always been a fruitful state; when you consider the crop it has produced (not weed), year in year out, it’s impossible to deny its credibility. Latest to come out of the sunshine state, no wait that’s Florida, right? Are the aptly titled Golden State and their debut, ‘Division’.

The record begins on the slower note of ‘All Roads Lead Home’, and as it’s jangly, reverb driven guitar kicks in all the buzzwords suddenly make sense. Words like: huge, stadium and, of course, the journalist’s favourite – anthemic. The sound of lead singer, James Grundlers, voice brings visions of an over the top stage production, and a mile long gap between the band and audience filled with yellow T-shirted security guards looking menacingly into the crowd. All of which give me that gross feeling that’s akin to touching some rogue food with your hand when doing the washing up.

Not one to judge on first impressions though ‘Divisions’ got it’s deserving first full spin. As it continued into ‘Setting Sun’ through ‘Save Me’ and into ‘World On Fire’ though, I began to trust my gut instinct more and more. The songs never seem to really go anywhere, they plateau far too soon into the record and follow the predictability playbook much too closely. Every song sounds like it would be more at home as the soundtrack to an American teen drama, perhaps as Seth Cohen stares into the distance in this oh-so-clever reference, the O.C. In fact after some quick googling, I discovered that one of the songs has already been used for a series trailer, perhaps this is where bands can now make up for the lost revenue from CD sales?

Golden State seem to have the their overall sound sorted out enough to get people throwing around buzzwords, but do they actually have the capacity to fill a stadium? I’m afraid not, mainly because they don’t have the strength within their songs to do so. It’s all too U2 repackaged for the new generation.

By the last two tracks, entitled ‘Light Speed’ and ‘Rocket’, the record had, ironically, long run out of steam. It left me ultimately begging the question of do we really need another stadium rock band, when bands like 30 Seconds To Mars or even You Me At Six are dominating the landscape? And the answer? A resounding no that echoes through an empty arena.

‘Division’ by Golden State is out now through State Champs Records.