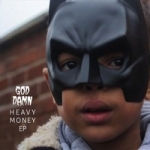 Wolverhampton based trio God Damn will drop ‘Heavy Money’ on the 17th of June, six tracks of riff worship, grunge infused vocal warbling and a hint of psychedelic attitude.  God Damn pack a heavy punch and it is going to be hard not to notice them.

Having already compromised an arsenal of delightful comments from The New Musical Express, The Guardian and Mr Ginger Wildheart himself, God Damn are creating a stir, which is good for any up and coming band, question is are they going to keep on rising?

‘Heavy Money’ is a noisy piece of work; ‘Red Checker’ bombards the ears with a frantic- almost thrash based introduction. The underlining riff accompanying the vocal melody in the verse just oozes sleaze; with its pacing vocals and the subtle hint of electronics it is clear why God Damn are causing quite a stir.

After another assault from the title track, things take a calmer pace in ‘I Don’t Really Mind’ a blazay track; it offers a great contrast to its predecessors and with an added harmonica interlude it demonstrates a band who are not constrained in their numbers.

‘New Invention Victory Club’ again demonstrates God Damn’s dynamical range, the heavy riff at the start blending into the soloing high lead is an ode to the heavy bands our elders once listened to (Zeppelin, Deep Purple and Hendrix to some degree). It is also completely lacking vocals which makes it stand out allowing you to appreciate the musicianship.

The thing to take from this band is that they are, dynamically pleasing. Going from the loud and brash to the sombre and subdued, God Damn are interesting just on that premise alone. However I am a sucker for a good riff and the trio have plenty. It is easy to see why they are gaining the national press’ attention as well as big musical names.

‘Hot Money’ by God Damn is out now on Gravy Records.