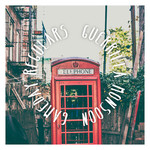 The Bronx and Birmingham (The Brumx?) are united at last, against all odds, thanks to a split release between Gameday Regulars and Guerrilla Monsoon, a friendly battle-of-the-bands of sorts involving two bands vying for the same spot, albeit on different sides of the ocean. To be entirely honest, I thought I’d had enough of the emo-inflected melodic punk cum gruff vocals formula. As far as I was concerned, The Lawrence Arms and Hot Water Music (the obvious point of reference here) had epitomized the genre, and everything that band that aspired to emulate that particular style in their wake were ultimately doomed to fail.

Well colour me completely off the mark. If this split is anything to go by, I’ll be happy if I get one of these a week. Though I’ll admit to a slight preference for our own Guerrilla Monsoon, whose ’December’ and ’Rome’ manage to be both cheery and bittersweet, with the latter taking more than a few pages from Alkaline Trio’s book. If their style is likely to spark some late 90s throwbacks, they also make the most of the contemporary preference for punk that can deliver more than one-pace (particularly evident on ’Rome’.

Gameday Regulars play it just a tad safer, though that doesn’t make their contribution any less enjoyable. Big, catchy, joyful, harmony-heavy choruses are delivered with healthy gusto and crashing cymbals. ’The Punisher’ isn’t going change your life, but it’s brash, fun and would like to go have a couple of beers, piss on some walls and dick around a little. ’Banks’, on the other hand, has that hint of darkness that, I feel, is a consistent element of the genre’s brightest moments. Its finale, in truth, makes for some genuinely rousing, and emotional to boot, closing moments.

One thing is for sure, these peeps are made for each other. Here’s a thought: ditch the split, make a double-album together. Everybody, listeners included, would be better for it.

’Split’ by Gameday Regulars and Guerrilla Monsoon is out now on All In Vinyl (UK) and Paper + Plastick (US).