Album Review: Future Of The Left – How To Stop Your Brain In An Accident 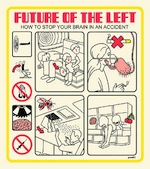 On one hand, there are bands that you have absolutely no idea why you like them, so disparate are they to the main thrust of your taste, somehow their inexplicable presence in your record collection makes you treasure them more. On the other, there are bands that you should absolutely love, but there’s just something that doesn’t click, some ineffable factor that repels you from them, like two north poles on magnets being forced to meet. Despite numerous attempts to force adoration, Future Of The Left have always fallen into the latter category, yet if a tickbox exercise were to be carried out, they’d meet every requirement. Former members of Mclusky and Million Dead, two of the finest post-hardcore bands this land has produced? Check. The rasping, Fugazi-esque buzzsaw guitars and a racket redolent of noise masters such as The Jesus Lizard? Check. The acerbic and pithy lyrics of Andrew Falkous? Check. All these reasons and more should make for a passionate love affair, yet listening to ‘How To Stop Your Brain In An Accident’ is more like a tepid, clothes-on makeout session with the last single girl standing at a crap party. And she uses FAR too much tongue.

There’s nothing inherently bad about this record – in fact, there’s nothing inherently bad about any of their records; the fact that this album reached its PledgeMusic target within 5 hours tells you a lot about the kind of reverence their fanbase reserve for Future Of The Left. However, just warrants a similar reaction all of their last three records have – it wasn’t brilliant, it wasn’t rubbish, it just…was. Free of the restraints posed by record companies, this is perhaps FotL’s most experimental record yet – the 50s newsreader-voiced rant of ‘Singing On The Bonesaws’, the Nick Cave influenced country balladry of ‘Why Aren’t I Going To Hell?’ and even – whisper it – a love song in ‘French Lessons’ portray this, but despite this expanding of range, the rest of the record falls into familiar tropes found within the rest of the band’s canon, minus the controversial synths. The musicianship on display is excellent, Julia Ruzicka’s basslines a constant delight and Falkous/Jimmy Watkins’ guitar playing, when granted leeway to enter more adventurous territory, are pleasing. However, despite these positive augmentations, if you’ve sat on the fence with Future Of The Left, this won’t be the record to change your mind.

At a whopping 14 tracks, it rather outstays its welcome – as aforementioned, it makes an effort to mix it up to keep things interesting, but with a further 6-track EP donated to pledgers, even FotL devotees may feel a little overfed. It also feels fairly singularly paced – to say that the band are going through the motions may be a little harsh, but there’s little here that recreates the frantic punk energy of ‘Lightsabre Cocksucking Blues’ from Falkous’ former charges Mclusky, or even songs found earlier in their output such as ‘Wrigley Scott’. Falkous once again proves himself adept at titling songs – witness ‘Johnny Borrell Afterlife’ and ‘I Don’t Know What You Ketamine (But I Think I Love You)’ as prime exhibits, but the songs themselves fail to match up to their excellent monikers.

All this being said, Future Of The Left remain an excellent proposition in the live arena, if only for Falkous’ infamous wit – a compilation of the withering insults put towards punters over the years would make for a more entertaining listen. A cynic might say that negative reviews of this band are few and far between, lest the reviewer be on the receiving end of a Twitter tongue lashing. The PledgeMusic initiative brings the connection between band and fan even closer, and those that put their faith and hard-earned into this project will undoubtedly be extremely pleased with the results, but for an outsider, ‘How To Stop Your Brain In An Accident’ may leave you a little cold. Having heard nothing but exulting recommendations of this band on numerous occasions, it might be that your friends might not know what’s best for you after all.

‘How To Stop Your Brain In An Accident’ by Future Of The Left is released on 21st October through Prescriptions.

Future Of The Left links: Website|Facebook|Twitter