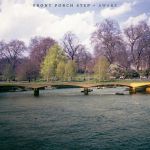 Front Porch Step is Jack Mcelfresh’s latest acoustic solo project. Jack himself has been a fixture in the Newark live music scene for quite a few years, appearing across hundreds of acoustic, pop punk and hardcore shows throughout the last 6 of 7 years. It wasn’t until 2012 though, he started going under the name Front Porch Step and it wasn’t long before he was featured in Alternative Press magazine which was the start of a snowball effect in terms of his audience, culminating with the release of his album ‘Aware’ this November.

I’ll be honest; when I hear the words “acoustic” and “album” next to each other I am kind of already a little bit bored. Don’t get me wrong, I like acoustic music. A good acoustic EP has the potential to wipe the floor with some full-band outputs in recent memory. It’s just when you put 11 acoustic tracks next to each you’re in danger of each track not standing out very much because the overall sound will be extremely similar and ultimately become boring. I went in with an open mind though, and for the most part I’d say my patience paid off.

The titular track ‘Aware’ was an early album saver for me. While opener ‘Angels and Demons’ isn’t necessarily a bad song, I wasn’t looking forward to hearing a full album if this was the base sound Front Porch Step was going for. Other than some creative lyrics, it all seemed a little too much like a generic acoustic song for my liking. Luckily it’s with the very next track we’re hit with some welcome changes. The vocals differ from the opener, the tempo is a little bit mellower and the addition of a simple piano part adds some much needed depth. It’s then as early as third track ‘Private Fears’ that I realised the lyrics are perhaps going to be the most well constructed and important part of this record. It would seem to me that lyrics come first for Front Porch Step when writing songs, with the actual musical side of things – although still being good – being pretty simple. That said, some of the lyrics border on the generic and cliché throughout some of the songs. For example, the lines “If I die before I wake” and “I will run away and get out of this town” are both used at some point, which both seem a bit over used by now and there are surely some ways to get across the similar message in a more creative way. It’s important to note though, that those kinds of lyrics are far outweighed by Mcelfresh’s lyrical know-how on other songs, with some of my favourite lines being; “I’m so tired of the rain falling softly on the ground, just enough to get my feet wet but not enough to let me drown” and ”I hate your cigarettes and the men that you go see, because one is killing you, while the other’s killing me.” I mean, this album is literally full of well thought out and poetic lyrics like those, so I think Jack can be forgiven for slipping into the clichéd side of song-writing every now and then.

The previously mentioned ‘Aware’ is undoubtedly the stand out for me, but ‘If I Tremble’ is a close second. The strings in the background work perfectly with the acoustic guitar, which are both accompanied wonderfully by the more toned down version of Mcelfresh’s voice that we were introduced to on ‘Aware’. At this point there is a clear distinction between the two sides to Front Porch Step, and unfortunately I think the neglected mellower side is the one that should really be the main focus point. The album is full of tracks like ‘Angels and Demons’, ‘Private Fear’ and ‘Run Away’ where the tempo is fast and vocals are loud, but I feel like Front Porch Step benefit most when writing the slower songs accompanied by softer vocals and maybe some backing strings or piano parts. It’s definitely nice that there are two clear sides to this record – given that I worried it would all sound the same – I just think the balance between each side is perhaps a little off.

In conclusion, some of the individual tracks make for a great listen. When at their best, the songs from ‘Aware’ are largely nostalgic to acoustic offerings from bands like Brand New, Say Anything and Saves The Day – which is of course a positive. They also have some of the most well written lyrics have had the pleasure of reading all year. When at their worst, however, the songs are far too simple to stand out from each other, leaving a lot of them sounding alike. I’m sure fans of acoustic music will enjoy the record, but for the majority audience, I can’t help but feel it would be a more enjoyable release if Front Porch Step had picked maybe 5 or 6 of the best songs and released an EP.