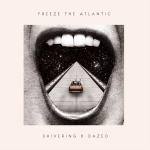 For their debut album ‘Speakeasy,’ veterans reunion act Freeze The Atlantic were awarded a strong 3.5/5.

Ex-members of the sorely-missed (this writer’s mourning period still hasn’t reached its end) Reuben and fan-favourites Hundred Reasons devised a release packed with big, catchy, tracks of hard-hitting alt-rock and hella 2000s. Back then, that writer’s ears had somehow managed to avoid being graced by the melodic goodness of the latter band. How fitting that new single and company EP ‘Shivering & Dazed’ should fall into the hands of a connoisseur.

Swiftly glancing at the contents of this rock pot-pourri, a harsher critic might suggest that complementing a new single with a previously-released bonus track and a triptych of acoustic renditions is a somewhat unsatisfying result. However, we shall take the road of balance criticism and invoke our ability to ignore the fact that ‘Speakeasy’ was ever released and consider the rest of the EP as spanking new tracks, and invoke our ability to ignore our insatiable need for new sounds. The lovely artwork does go some way towards making up for the above-mentioned flaws.

All of this structural talk shouldn’t overshadow the fact that ‘Shivering & Dazed’, first and foremost, is a cracking single crafted with the sort of hyper-melodic rockdom and effortless vocals that gave Hell Is For Heroes their cult status. Its consistent energy always contained in its elegant delivery, the new single is a terrific example of what the band are all about. ‘Lost At Sea’ takes the pace and heavy factor down a notch, but compensates with clever songwriting: tasteful, understated, guitar licks pop up in the background; charming harmonies emerge out of nowhere; slight rhythmic changes alter the song vibe.

The rest of the EP consists of acoustic versions of ‘Volcanoes’, ‘Freeze The Atlantic’ and single-in-question ‘Shivering & Dazed’. For those not previously aware, ‘Volcanoes’ was one of the highlights off their debut album (I know, I’m breaking my own rules, one of the perks of making them) and, unsurprisingly, it doesn’t love any of its quality when stripped down. That being said, it doesn’t add a whole lot either. Similarly, ‘Freeze The Atlantic’ even loses a lot of its charm in acoustic format. On the other hand, ‘Shivering And Dazed’ is not only translated, but also significantly altered from its brash straight-up rock into a sweet folk ballad of sorts, giving it a stronger justification for existing in the first place.

Freeze The Atlantic are a modern twist on the brand of British alt-rock bands we loved in the noughties, and possibly one of the last chapters of that era (may it last as long as possible). ‘Shivering & Dazed’ contains a strong single, a great bonus track, and a mixed bag of acoustic tracks. There’s little doubt that this particular package is aimed at a converted audience, but sceptics would still be better off lending an ear for those two opening tracks.

‘Shivering & Dazed’ EP by Freeze The Atlantic is available now on Alcopop Records.