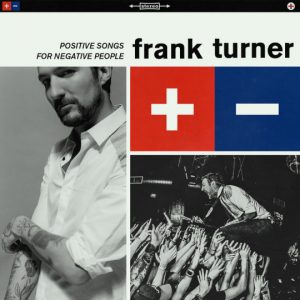 Turn the clock back a little over ten years or so and the name Frank Turner would have meant very little to UK music fans. Sure a smattering of those immersed in the punk and hardcore scene would have been aware of the inroads made with his band Million Dead, but even few of them would have picked him out of a lineup. Now in the summer of 2015 the build-up to the release of ‘Positive Songs For Negative People’ has seen the name and face and words of Frank Turner have graced nearly every corner of the British media. After completing a healthily attended run of arena shows on his last lap of the UK, it only seemed natural that the next step in the odyssey that is Turner’s irresistible rise from journeyman punk singer to troubadour hero of the nation, would eventually involve a release with this high a profile. One with widespread media fanfare and one that, with Butch Walker at the helm, sees him work with a big-name producer for the first time. Then there’s the not-so-small matter of major label Polydor’s involvement.

All of this left long-term die-hard fans ever so slightly worried about what effect this might have on Turner’s fierce independence, and on the raw punk spirit and intangible spark that makes his music so great. Would the big-time label and producer meddling kill that spark, or even worse bend it into bland mainstream rock mediocrity? It’s been a nervous wait to find out that’s for sure.

The early signs were overwhelmingly positive when ’Get Better’ gave the first glimpse of what was in store. Providing an effusive and all-consuming rallying cry to not let life beat you down, to stand your ground and fight for better things, this stomping folk-punk number is the standard that Frank built his entire new outlook and the mood and theme of the album around. What’s more, it’s easily the pick of the tracks and as strong a single as he’s ever released.

The album itself starts of in an unassuming fashion with the rustic and pure acoustic folk of ’Angel Islington’ meandering proceedings into life and picking up Frank’s sound, mood and story almost exactly where ‘The Fisher King Blues’ left off on the last record. But then the raucous defiance of the aforementioned ’Get Better’ resets the mood and the tone; really kicking things into high gear. This is immediately followed by the second single ’Next Storm, a jaunty piano-driven number with a similar message to the previous track and one that sonically speaking is the most similar to ’Tape Deck Heart’. It gives another simple but similarly empowering message, pick yourself up, dust yourself down and go grab life by the balls.

We get a throwback to the Turner sound circa ‘Poetry of The Deed’ and ‘England Keep My Bones’ courtesy of ’The Opening Act of Spring’ before ’Glorious You’ provides the record’s biggest feel-good moment. Grooving bass and lead guitar lines intertwine through the verses before a big sentimental pop rock chorus breaks out on a song which will surely become a live favourite and one likely to bother plenty of radio playlists.

Later, on ‘Mittens,’ Frank is at his raw and emotive best on a number featuring plenty of rootsy charm and underpinned by organ swells. Proceedings get unapologetically reflective as a plenty hacked off. Turner increasingly lets the hurt go, yelling the refrain with more and more angst through the choruses, intoning “I used to write you love songs, you never fell in love” over and over’ in the sort of bitterly resigned fashion that we can all relate to.

This marks the bottom of the emotional trough though and the two-minute punk rock thrash of ’Out of Breath’ see’s Frank turn the corner once more and soldier on swinging, all the way to roaring the glory of his mental victory from the rooftops. “At this truth we have arrived, god damn it’s good to be alive” he belts out on ’Demons’, unrestrained, set to make every second count and no longer giving a thundering fuck about the past or the pitfalls waiting around the corner. Something he sums up with the brilliantly phrased quip “We’re not delivering a perfect body to the grave, time isn’t to be saved.”

Proceedings hit their most indifferent point with ’Love Forty Down’s series of overworked tennis metaphors backed by urgent acoustic guitars and piano fills, before the switching quiet and loud chugging rock, and further posi rhetoric of ’Silent Key’ raise the mood and the standards once more. A light and airy bridge featuring a fragile female guest vocal provides a brief highlight.

That just leaves the truly special and hardest-hitting track that Frank has decided to save until last. It’s safe to say no song released this year, possibly this decade will cut the listener to the bone on an emotional level quite like ’A Song For Josh’. Recorded live, Turner pours out his heartbreak and regret at not being able to save his friend, well known American promoter and his former head of US tour security, Josh Burdette from his demons. There is no more moving testament to the dangers of depression or the desolation suicide can leave behind then the breaking and sadness racked vocals on this track. In time this will be the song that more fans connect to, and shed a tear over, then any other Turner has recorded. Even more so then ‘Long Live The Queen’. Somehow it’s only fitting that the most positive Frank Turner yet closes with such beautifully captured abject hurt and tenderness.

Realistically there are two standards to apply to the success, quality or lack thereof of ‘Positive Songs For Negative People’. The first is how the record measures up for casual and new fans. Either those drawn in post-Olympic’s appearance or those hearing Frank properly for the first time after his media blitz piqued their curiosity. By that standard this is a great, and vastly enjoyable album. The lead singles are excellent, the writing and musicianship equally so; and the whole album manages to be just punk and folk enough to be different and an authentic Frank Turner record, without ever leaving mainstream radio rock far enough behind that casual listeners feel to lost or out of their comfort zone. Similarly, the force of will behind Frank’s resounding positivity on this release will undoubtedly appeal to those of a more pop or sanitised music taste. Certainly more so then his more angsty, maudlin or bloody minded previous efforts ever could have. All this considered ‘Positive Songs For Negative People’ absolutely deserves to be Frank’s most commercially successful and wide-reaching record to date, and it could easily be his first ever number-one album.

But then we come to how this album will be received and remembered by that other area of the Turner appeal. The hardcore fan base. Those of us that have been revelling in each release and singing our hearts out in increasingly large and less dingy rooms for the best part of a decade. The people who will always apply the well is it is as good as ‘Love, Ire and Song’ measuring stick to each new FT album. And in this case sadly it just isn’t. Yes, there are some songs here that will become beloved and standout moments of live shows for years to come, ‘Get Better’ and ‘A Song For Josh’ chief among them. But as a whole album the consistency of each song being truly excellent, and that same level of being able to listen from start to finish feeling the same magic each time isn’t the same here. In truth 2013’s ‘Tape Deck Heart’ is a better overall record too. To be saying that about an album Frank has made with by far his largest amount of resources to draw on yet is pretty disappointing. We can all be happy that once again Frank is happy and that he’s made record that resonates with that fact. We can also be happy that he’s made another a strong album, a great one in fact. Coming from most other artists this would be hailed as properly wonderful stuff. But coming from Frank, bar the last track, it just isn’t as special as it could and really should have been. And that is a bit of a shame.

Still, putting a positive ending onto some negative thoughts, ‘Positive Songs For Negative People’ is still undisputedly worth the time, the money and the enjoyment of as many listeners as possible. Few releases will get better then Frank in 2015.

‘Positive Songs For Negative People’ by Frank Turner is out now on Xtra Mile Recordings and Polydor Records.