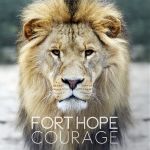 A band’s first record is by far their most important; few bands manage to make up from a damaging debut. It takes all manner of things to make a first record a success though, and perhaps one of the most important components is courage. The courage to ante up and gather together the minerals provided to actually put out a record in the first place. So is ‘Courage’ a more than apt title for a debut record of this magnitude or a foreshadow of what Fort Hope might need a little more of in order to repair the damage next time around. Basically lads, have you got the balls?

‘Courage’ starts on the absolute blinder of an introductory track, ‘We Are The Gods (Heritage)’. Its violins and soft, almost spoken, vocal lure you into the tracks groove and after vocalist Jon Gaskin lets off a flamboyant “woooo!”, you know you’ve got something worth hearing the rest of. There’s something about the way the parts lock into each other and create a really solid groove that I’d challenge anybody not to nod their head to, it’s very early Cartel in it’s ability to add production elements without heading too far down the out and out pop route. It’ll come as no surprise to learn that the two are label mates over at LAB records.

The rest of the record after this point, for me, was a little bit of a disappointment. Sure there are still other great moments; ‘The Rapture’ locks into a similar groove, and ‘Earthquake’ will be the soundtrack to pre-pubescent breakups all over the country, but they are few and far between compared to the records solid opener. I think I expected more of that Cartel influence to creep into the later tracks on Fort Hope’s debut, not that I want them to be a straight rip-off but instead it all seemed to get a bit Coldplay after the initial two or three tracks.

The latter half of the record seemed like it had already reached its peak; that initial excitement never really surfaces again, and whereas the first half promoted a few repeat listens, that second half could be easily cut out in the creation of a playlist.

At first, I was unsure as to whether Fort Hope’s debut was meant to be an album or an EP. I mean it’s a clever move putting three acoustic tracks at the end of your record to lengthen it out but you can’t fool me boys, ‘Courage’ is at best a mini album with some bonus tracks at the end. It’ll be interesting to see what Fort Hope can do with a full length but until then it’s not ground-breaking yet it’s certainly promising.

‘Courage’ by Fort Hope is out now on LAB Records.