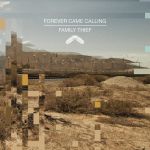 Forever Came Calling is a California pop-punk band much in the vein of Handguns and Neck Deep, to pick two of many out, that have released a full length and an a couple of EPs, including one with the former of those bands. Family Thief is an acoustic solo act from the same town, Twentynine Palms, who has released three songs prior to now. With this in mind, that the two would do a split together is hardly surprising – probably the case of an established band helping out their friend – but unfortunately for them the results are uneven and ultimately a bit forgettable, but not so much as to cause anything near a negative response, kind of like a weak cup of tea.

The split is entirely acoustic – 2 songs from each act. Weirdly enough, Forever Came Falling’s songs tend to fare a little better than Family Thief’s maybe since the change of style holds some novelty and presents a new(ish) challenge for the usually electric band. In any case, their songs sound like a new approach has been taken to them, rather than a re-appropriation of ideas for standard pop-punk songs. For instance, the hooks are evenly balanced between guitar licks, orchestral accompaniments and vocal melodies. This gives their half a very well-rounded sound and not milking a particular aspect keeps it from getting stale. In particular, ‘Endangered Innocent’ has an abundance of features to listen out for, especially in the second chorus which fires on all cylinders in the subtlest way possible. However, the song is let down by the awkward transition into its final section.

Despite the skillful adaption, instead of the easy option of merely repurposing their usual material, Joe Candelaria’s vocals are the giveaway that this is a pop-punk band gone acoustic. Not that this is a bad thing – the high pitched, semi-yelled phrasings make for a bit of energy which can sometimes lack in the acoustic genre. These songs are good, there is nothing strikingly wrong with them, but they don’t quite make the grade for great acoustic music.

Family Thief’s songs, however, are just quite dull. To his credit Malcolm Williams does throw in some nice full vocal melodies and harmonies, but for the most part the songs fall straight into the murky depths of acoustic singer-songwriter 101 territory. Subtle and simple chords, sombre vocals that sometimes display a hint of passion and the occasional airy guitar melody – there isn’t a great deal more to these songs. They aren’t quite expressive enough to throw me face-first into sadness or joy, nor technically proficient or creative enough to grab my musical ear. It’s bound to appeal to some tastes but I just found myself bored.

Given their relative popularities, this release is going to be mostly for fans of Forever Came Calling, which is good because they throw the most enjoyable material into the track listing. Their songs have more in the way of personality and their being less familiar with acoustic music as a band gives their songs a little bit more of a wider scope of influence. The whole thing averages out as, well… average, given the noticeable disparity of quality between the two halves, but unfortunately nothing really jumps out and calls for you to listen again.

‘Split EP’ by Forever Came Calling and Family Thief is out now on Pure Noise Records.