Album Review: Finch – Back to Oblivion 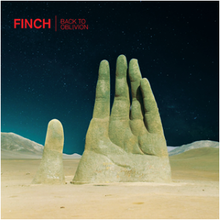 That ‘Back To Oblivion’ is only Finch’s third album despite having been a band for the better part of a decade and a half is as clear an indication as any of their turbulent history. Having spent nearly as long disbanded in that time as they have together it’s fair to say “Back From Oblivion” may have been a more fitting title. And with this offering coming a full nine years after Finch’s last full length the weight of expectation is one the record was always likely to struggle to meet.

Sadly ‘Back To Oblivion’ only sporadically comes close to living up to either this expectation or the band’s former glories. Things open with the title track, a song which the Cali natives have been playing live for several months already, and perhaps unwisely see’s the album kicking off with by far its strongest track creating a feeling that it has peeked before things have really got going. The track is punchy, enticingly melodic and has a big emphatic chorus worthy of the Finch of old. It also feels like the band have put all their efforts into loading the opener with all their urgency and feeling, leaving little to spare for many of the following tracks.

‘Anywhere But Here’ makes a half-hearted attempt to keep the battle going, showing plenty of scale to the sound and with a suitably frenetic riff cutting in in places, but Barcalow’s vocals, so full of fire on the previous number, feel a little restrained considerably limiting the song’s impact and making hard work of cutting above some good guitar work.

‘Further From The Fight’ starts with a near identical riff to the song before, and continues in a similar vein, highlighting one of the record’s main issues, the songs not doing enough to differentiate themselves from each other, resulting in them merging into one rather indifferent listen for long stretches.

Things get worse on ‘Murder Me’ as Finch shoot for atmospheric and moody and get listless and contrived, although the song does have the saving grace of Barcalow showing odd glimpses of his vocal potency. Meanwhile ‘Picasso Trigger’ is a predictable and near cartoonishly stereotypical slice of post-hardcore complete with dreadful vocal effects. There’s time for some more ill-advised faux brooding on ‘Play Dead’ before mercifully allowing the album to improve going into the second half.

‘Two Guns To The Temple’ gives a much needed reappearance to the fire, focus and backbone that its predecessors had been so badly lacking, packed full of energy and delivering a vocal loaded with passion and conviction as Barcalow finally lets his full vocal repertoire out to play. The improvement continues with ‘The Great Devide’ (yes that’s how they spelt it) providing ‘Back to Oblivion’’s peppiest most accessible moment.

After another couple of stronger offerings in the form of ‘Us vs Them’ and ‘Tarot’, ‘Back To Oblivion’ staggers tiredly and tepidly to a close with the awkwardly structured ‘New Wave’ seguing clumsily between a post-hardcore epic and an acoustic balance with no particular finesse, guile or emotional output.

It would have been great to say that ‘Back To Oblivion’ sees Finch put their differences in the past and hit top form, disappointingly instead this record is overly calculated, contrived and often too distant and listless to really connect with. Like Finch’s career the album seems to peak to soon, and those looking to get into the band would be better with their earlier work rather than trying to gauge a band a shadow of what it once was.

‘Back To Oblivion’ by Finch is released on 29th September on Spinefarm Records.