Album Review: Fighting Fiction – The Long And Short Of It 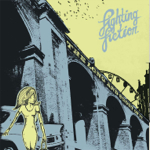 Brighton’s Fighting Fiction return with their second full-length album on September 16th and, for the most part, it’s really rather good. Reminiscent of some of punk’s biggest hitters and with a good slice of other influences on the side, ‘The Long And Short Of It’ falls into a lovely niche somewhere in the middle of Bad Religion, Frank Turner, and The Gaslight Anthem.

Not every song on this album is as good as the excellent average. I’m not overly taken on the acoustic ‘Rebel Without a Cause’. It’s a good track, a neat bit of storytelling and generally enjoyable, but its position on the album just doesn’t feel justified to me. On the other hand, the following number, ‘Casey Jones, Union Scab’ is an absolute belter. The chorus is next level punk rock might. Such a massive swell that I’ve skipped back to the beginning of this track more than a couple of times before I’ve let the album continue just to hear it again. The dual vocals are incredible (not just on this track either, just to clarify) and ‘Casey Jones’ is sure to be one of Fighting Fiction’s most played songs.

Sometimes tracks fall a little flat in places. The majority of ‘A Common Enemy’ for example, is amazing. A stomping, sing-along punk anthem, the sort of music that makes me want to stick a fist in the air and start a circle pit in the street. Massive vocals and a near perfect melody, it’s brilliant. But then, for some reason, I’m sucked out of my enjoyment and I’m at a football match on a Saturday afternoon as an awkward chorus of ‘Oh, when the saints go marching in’ breaks the reverie. Don’t get me wrong, I love football and I’ll spend every Saturday for the foreseeable future screaming songs at a bunch of dudes who can’t hear me. It’s just not the kind of fun I was having ten seconds before in a chair in my front room.

With the exception of a few awkward little moments, however, ‘The Long And Short Of It’ is an absolute joy to listen to. Straight up, honest, rock and roll.

‘The Long And Short of It’ by Fighting Fiction is out on the 16th of September on Xtra Mile Recordings.