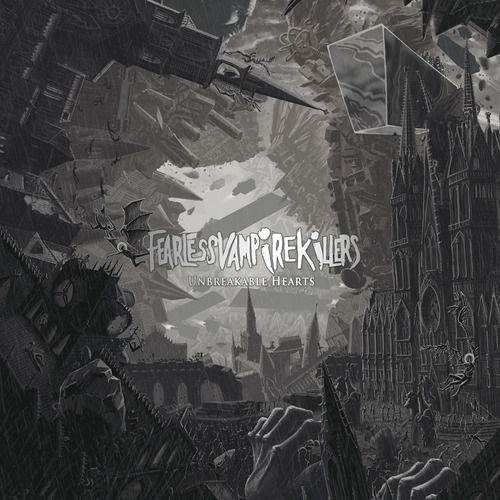 It’s impossible to avoid the waves Fearless Vampire Killers have made in recent years. From touring with Black Veil Brides, through creating their own label Goremount Records, to establishing a subscription social network (The Obsidian Bond,) the London five piece are aiming for total domination. ‘Unbreakable Hearts’, the follow-up concept album to their previous ‘Militia Of The Lost’, proves that much like their namesakes, placing Fearless Vampire Killers into a box is a perilous venture. The merging of heavy metal, punk and symphonic rock occurs seamlessly, only this time, FVK have thankfully dropped most of the previously overplayed vampire ethos in favour of a more accessible concept of conflict and defiance.

Mirroring the standalone legacy of its successor, each track on ‘Unbreakable Hearts’ holds its own, allowing for seamless accessibility to what could easily have been an overworked concept album. Split into four 4-track-long chapters – Exile, Loss, Recovery and War – Fearless Vampire Killers continue the tale of the fictional war-torn city of Grandomina, but could this lengthy 17-track chapter be the last in the story?

Emotive cries doing battle with punchy vengeance in ’Say What You Want From Me’ and ‘Remember My Name’ create a standoff against an emotional enemy as well as the villains beyond the gates of Grandomina. Recreating a diverse process of feelings surrounding both emotional and physical conflict, the singalong and vibrant solo of ‘Turn Your Heaven To A Tomb’ contrasts beautifully with the mournful reflections of ‘Our Nature’s Unnatural ‘.

Fearless Vampire Killers’ evident influence from ‘Three Cheers’-era My Chemical Romance emerges with incandescent vengeance through the contagious ’Edge Of Eternity’, while the title track ’Unbreakable Hearts’ takes a stand that long term fans will love. ‘The Recovery’ chapter captures all the catchiest hooks of the singles ’Neon In The Dance Halls’ and ’Batten Down The Hatches’, forging two of their greatest sing-alongs and powerful riffs in quick succession.

’Dream Of You’ is one of the most haunting ballads to emerge from the scene in a long time, reminiscent of The Cure mashed beautifully with Guns ‘n’ Roses with an unforgettable lyric – “if you live in a dream, you’ll forget how to scream”. For fans of the slower, melodic approach, ‘Brave The Night’ is the black sheep in the grand scheme of the record, but stands tall on its own to prove FVK’s atmospheric talents.

The album’s only let-down is the overdramatic ‘Lucifer’s Shroud’, completely missing its storytelling target, but is thankfully salvaged by the next track, where ‘City Falls To Dust’ closes this episode of Grandomina’s destructive tale with a bang – literally. What does this mean for the city, or worse, the band? To be continued… no doubt.

‘Unbreakable Hearts’ is without doubt the best Fearless Vampire Killers have ever sounded in the studio, with heart-wrenching defiant vocals accompanied by a sturdy concept and great instrumentals. Refusing to be fenced into one genre, the only way is up for these rising stars.

‘Unbreakable Hearts’ by Fearless Vampire Killers is released on now on Goremount Records.