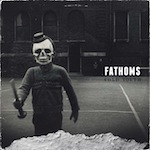 Fathoms are a Brighton-based melodic metal band that formed in 2010. After releasing a free-for-download EP last year that largely received positive praise from reviewers and fans alike, you might have expected them to move on to a full-length for their next release. Well, not quite. They’ve followed up 2012’s ‘Transitions’ with another EP.

We get started with the longest track of the four, ‘Pride of Lions’. You might get the feeling that means there’s a long drawn out intro (hence why it’s longer than the other tracks and also at the start of the EP), but in fact you’re only given 30 seconds to be eased in before being hit with the first stab of the guitars and bass, with the drums carrying on until the song really gets started. At this point I was thinking that although it sounded very good, we’ve heard it all before. If this was released in 2006, Fathoms could have probably been up there with the biggest metal/hardcore acts around at the moment. Unfortunately, when you fast-forward 7 years to 2013 when this EP has actually been released, you’ll find that it’s becoming a lot easier for bands of this genre to get crowded out as there are so many bands around doing this thing now due to the success of the likes of Your Demise, Last Witness and, of course the most notable, Bring Me The Horizon.

There is, however, something about this EP as it goes on that separates it from the current crowd. I can’t quite put my finger on it but it’s just something about the whole overall sound. Each individual song is well put together, well written and not one thing is overpowering. All the instruments are as clear as they need to be, which is a problem I tend to find on music of this genre – the guitars are almost always way too loud, usually down to the fact a guitarist was the one who mixed and/or mastered it. It’s also not heavy for the sake of it. I imagine most of these bands come to a point when writing a song decide to just stick a breakdown in there for the sake of being heavy, but with all four songs on this EP it seems that each part adds something. The placement of each section seems thoroughly thought about and I imagine that goes a long way towards that ‘special something’ I can’t quite put my finger on.

Overall, I imagine it ticks all the boxes for the people Fathoms are trying to appeal to, I just don’t think I’m one of them. There’s something about a band that quotes a Tyler, The Creator tweet on their t-shirt that I just can’t get behind. Musically the record is put together well but it’s nothing amazing and I’d personally place it in the ‘take it or leave it’ pile. If you’re a fan of melodic metal though, I’d suggest checking this out ahead of anything else at the moment. You might have just found your new favourite band.

’Cold Youth’ by Fathoms is avaiable now through Ghost Music