Album Review: Every Time I Die – From Parts Unknown 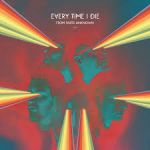 Seven albums in might see a band slowing things down, getting tired at their ‘older’ age and mellowing down a bit. Of course, this isn’t the case. Of course it isn’t; this is Every Time I Die. And, If anything, they’ve changed gears and brought more carnage and ferocity to their already distinct and honed sound on ‘From Parts Unknown’.

The opening number of ‘The Great Secret’ might just be the band laying out the blueprints to the rest of the album. Strummed chords ease in before everything is let out all at once, ripping into blast beats and then into the infamous riffery of a victorious and formulated past. Riffs over double time drums, regular time and half time are all in favour on this album and the extra double time usage has increased; following on nicely from ‘Ex Lives’ and the introduction of Ryan “Legs” Leger into the foray on ETID fans all over.

Recently released single ‘Decayin’ With The Boys’ feels like the party-esque ‘We’rewolf’ for a newly revitalised Every Time I Die, combining the majesty of riffs with King Keith’s lyrical ingenuity, flowing out lines like ”I’ve got so much soul that I’m barely alive’” and giving all listeners one hell of a mission in deciphering any and all cryptic metaphors that Buckley is known for. However, his jaunt with The Damned Things let his vocal chords deliver cleaner melodies which are given their moments to shine, and they’re the right moments; giving easier and clearer listening to specific phrases and changing intensity over different monstrous musical measures.

What is most striking about ‘From Parts Unknown’ is that it sort of is. Despite having their own formula, which they’ve crafted so well, the album still feels like a new beast. A beast that’s just been injected with the most revitalising methods known, or for use of a more appropriate choosing of words, from parts unknown, unleashed on a population that already knows it so well and knows the best is to come from it. It’s like having a sequel to this year’s Godzilla movie, except he’s now shedded that extra weight and he’s clearly been working out. And he’s wearing some newly created, lightweight armour. And a crown.

Armour and a crown? It makes sense really. Nothing can take down the beast that is Every Time I Die. No other band comes close to doing what they do. Even then, Every Time I Die basically are their own genre and anything similar is just a cheap imitation. And the crown? Well, they’re the kings aren’t they. They may be older and wiser, but they still pack more punch than bands half their combined age. Whilst ‘From Parts Unknown’ may be the similar sets of carnage and ferocity that you expect, it’s still got new depths of brutality that isn’t afraid to be shown. This is a new beast, but it’s still Every Time I Die; here’s to the next five albums.

‘From Parts Unknown’ by Every Time I Die is out now on Epitaph Records.