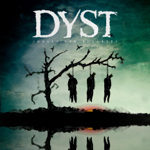 Norwegian metalcore outfit Dyst’s début album hits the UK on the 28th of this month. Although a step above the genre’s standard fare this is not a perfect album by any means but if you’re at all intrigued then this is definitely worth a little of your time.

Opening track ‘Sailors Grave’ (before anyone starts, there isn’t an apostrophe in the copy I’ve been sent either) begins pretty weakly, before stepping up its game and hitting home with an excellent slice of heavy music, something of a theme for the record. The weakness here, as at other points over the course of the record, is the obviousness of certain riffs. The majority of this record displays a band that can play, a band, in fact, who are damn good at what they do and it makes these little sections of predictability a little irritating rather than simply disappointing. Dyst unveil their excellent ear for an atmospheric build on this track, something refreshing in a world often shamed by lazy breakdowns – although fret not breakdown fans, they’ve not severed the tie entirely.

‘Crossbearer’ follows a similar path with a little more tact. A band putting their own mark on a sound they love is not to be sniffed at, not every band can, or wants, to reinvent the wheel. Here we find some excellent writing, brilliant vocals, and an outro riff to die for. Heavy as hammers and just as tough this great bit of guitar carries the track offstage to make way for the beast that is ‘Black Waves’, one of my personal favourites. There are things not always present throughout ‘Judges And Butchers’ that enhance this song (although neither are they confined to this song either): Multiple vocals and thoughtful drums. The vocals throughout this album are wonderful. They’re searching, desperate, and hard as all hell but they work far, far better in the mix with the others that make themselves apparent on ‘Black Waves’, weaving themselves together to create something for the lead to stand atop. Prior to this song I found the drumming to be a little lacking, not bad, just not overly imaginative – always a risk with heavier music as buying a double bass pedal does not make a metal drummer – but at last here we’re witness to some clever beats and intelligent time keeping.

It’s the vocal work that above all else makes the album’s title track one of the strongest. A great mix of different sounds, fitted to some well-arranged instrumentation makes this one to check out. A heavy, graceful, searching chunk of heavy music leads this track out and leaves a great taste the mouth and feet tapping well into the following track.

I wish that ‘Judges And Butchers’ ended with penultimate beast ‘Renewed’, because although the worst offender in terms of Dyst’s ‘think you’ve heard this one before?’ approach (which almost has a whiff of deliberateness about it at this point, an attempt to prove they’re not ‘that’ band) this turns out to be the best song. It’s a monster, the vocals come together flawlessly, the guitar work is impeccable, and the drums and bass pull you relentlessly into their domain. By the end of the first listen this track went from being a face-on-desk metalcore listen to a ‘chins up, let’s do this’ affair.

Sadly, closing track ‘Green Pastures’ doesn’t quite match up to its predecessor. Ultimately, I think this track has been added to tip the track list into double figures. It’s a pretty generic track and dampens the mood; following a little too much instrumental building to end the album it leaves everything feeling a little flat. Had ‘Green Pastures’ and ‘Renewed’ been switched around, Dyst would have escaped this little tirade. As it is, I’m a firm believer in the perfect closing track, something that demands you immediately replay the record and this just isn’t it.

All in all however, this final track doesn’t really knock any gloss off the band’s performance. As I’ve said, this isn’t a perfect album but it’s a damn good debut. If Dyst can clear out the clutter and take themselves that extra step away from the generic fare that ‘Judges & Butchers’ proves they’re above, they could find themselves onto something special.

‘Judges And Butchers’ by Dyst is out released on 28th January on Karat Records.