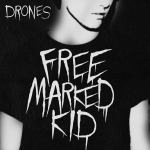 If you haven’t heard of Drones, you can be forgiven as they only formed in 2010 so they haven’t had too long to put their footprint on the UK punk scene. Having said that, it only took them a year to sign to Lockjaw Records for the release of their debut album ‘Mutiny’. With their new EP ‘Free Marked Kids’, which is being released on the 9th September, they aim to produce a fresh take on the likes of Anti-Flag, The Distillers and Rise Against, and it does exactly what it says on the tin.

Before touching on the rest of the record, I’d like to skip straight to the title track ‘Free Marked Kid’. This is one of the catchiest punk songs I’ve heard in a long time and I feel like this song, more than the others, executes the influences on the band that I like the most. Instrumentally, it’s fairly simple and probably nothing we haven’t heard before but the vocals are what make this song for me and in fact, that’s more often than not the case on the whole record, even on the more instrumentally complicated tracks like ‘For The Record‘ and ‘Graves‘. There’s just something about these screechy punk vocals that are done exactly to my taste on this EP. Having said that, vocalist Daly George also takes various opportunities to prove he has more to his vocal abilities than shouting. You don’t have to look further than the Blink-182-esque bridge in the previously mentioned title track to find an example of that.

While ‘Free Marked Kid’ is my pick of the record, that’s not to take away from the likes of ‘Empty Words’, which has a very catchy pre-chorus that I can’t see shifting from my head any time soon. ‘Bloodline Kings’ lets some of the more hardcore influences the band have take full reign and, vocals aside, sounds like it would fit right in to a H2O record. The EP is concluded with ‘Graves’, in which the formula we’ve gotten to know over the last 5 tracks is abandoned and this time some of the instruments get the most attention. James Kerr pounds out an incredible bass line throughout the verses, with various mini guitar solos making appearances giving guitarist Rob King his moment to shine.

There is a lot of mention of bands like Anti-Flag and Strike Anywhere when talking about Drones, and while I’m sure they’re heavy influences on the band after listening to this record I also see Drones fitting in with the likes of Code Orange Kids, Marmozets and Cerce, and I think it’s that side of the band that I prefer. It is, however, their more polished sound that makes them open for listening to fans of all those previous different bands, which is an amazing plus to have when releasing a new record. That’s not to say they don’t do the more pop punk side of things well either, as on this EP they execute both ends of spectrum fantastically, all the while making each song feel connected and the record flow perfectly.

In summary, while I can appreciate some people might not like ‘Free Marked Kid’, the vocals for example are of specific taste, it ticks almost all the boxes for me and although I don’t think it will be turning the heads of listeners who aren’t already fans of the genre, I think if you’re a fan of any of the bands mentioned in this review you should definitely check this EP out. The more hardcore punk side of this EP makes it relevant to me right here and now in 2013, mixing that up with the now-nostalgic vibes of bands like The Distillers, Rise Against and Anti-Flag is nothing but a sure fire recipe for success in my eyes, especially when executed as well as it is on this record.

’Free Marked Kid’ by Drones is released on the 6th September on Lockjaw Records.