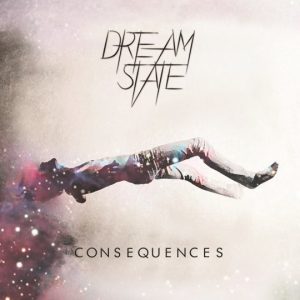 South Wales’ Dream State are anything but in the vein of mellow as their name may suggest. Raising an alarm in form of debut EP ’Consequences’, the fiery five-piece have disturbed the airways are that set to rival the post-hardcore lineage of their province.

’Burden’ is an initial slow burn, signalling the classic calm before the storm before leading to machine-turret tremolo guitar. Call and response sections reel listeners in, ensuring a live favourite like ’Relentless’ that shifts with the force of vocalist Charlotte-Jane Gilpin’s forceful cadence that declares, ”You’re going nowhere, you are lost inside your head, you’re going nowhere and I can’t do it again.”

’Burn Them Down’ is the only letdown on the EP, lyrically verging on generic. ’Consequences’ is redeemed by ’Try Again’ that makes use of the broad command of Gilpin’s voice, from back and forth scrambling throat vocals to her enveloping vibrato.

Finally, closer ’Rebuild, Recreate’ is ambitious, where the band strip back to an enchanting acoustic gloom that transforms into a hail of pounding drums and walls of guitar as a curtain call.

On ’Consequences’, Dream State have crafted a starting point as a potential startling presence within the post-hardcore scene.

’Consequences EP’ by Dream State is released on 20th November.