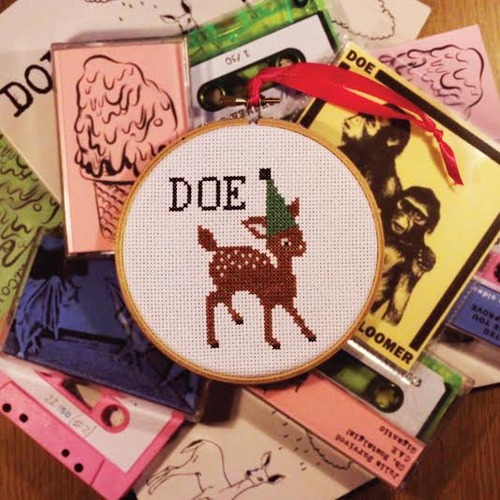 Doe’s indie punk sound is definitely very much flavour of the moment with bands like The Front Bottoms, Tigers Jaw, Joyce Manor and Modern Baseball all flying the flag for the genre to one extent or another. On top of this they have the excellent Specialist Subject Records behind them and recently embarked on a mini tour with Bangers. Everything seems to be going very much their way at the moment.

‘First Four’, the band’s debut LP, is a collection of the EPs, cassettes and CD-Rs they have released since their inception at the beginning of last year. As the band themselves confess, they are heavily indebted to the 90s for inspiration, and there are definite shades of thePixies, Weezer, Sleater-Kinney and Hole in their upbeat and melodic sound.

But the band have some fairly evident issues weighing them down. Neither the voice of lead vocalist Nicola nor back-up Jake is particularly strong. Nicola gets the basics right but when the two of them reach a crescendo on a chorus they tend to sound quite strained – and Jake’s can seem particularly grating.

It feels like Doe really want to sound as cute and likable as their counterparts – but also like they are perhaps trying a bit too hard to achieve it. The bending notes, discord and noise at the end of ‘Oh Nostalgia’ is almost added in as an after-thought and comes across like a last-ditch attempt to give their sound a bit of much needed edge.

There just isn’t enough to their music to make you come back for more, and not enough character to allow them to realistically compete. ‘Nowhere  Girl’ is a step in the right direction: a much more forceful and decisive track with a strong, driving melody. ‘Julia Survived’ is also really catchy and a much better moment on the album. But it’s not enough to save an album that, overall, is a bit of a disappointment.

‘First Four’ by Doe is out now on Specialist Subject Records.