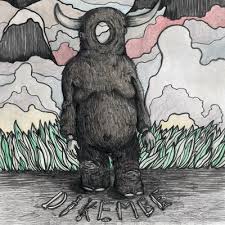 ‘Mediumship’ is a record that has opened up new doors in my head. The album from Florida band Dikembe is a masterful slice of music that keeps the blood pumping through the veins with velocity. It’s loud and proud, it’s rough but ready, it has those riffs that are monumental and infectious. The LP will turn heads and will provoke minds.

The album features songs that highlight misery. It’s very solemn and sombre, slicing deep into the skin of pessimism. The sound is enthralling and charged, silencing the disheartening voice of mediocrity. This record doesn’t shrivel up when the light shines on it, it basks in it.

‘Mediumship’ commences with ‘Even Bother’. The soft vocals lead the charge. Then the guitar strikes through with the thumping drums. The chorus is brilliant, orchestrating the lyrics with great intentions. Meanwhile, ‘Pelican Fly’ enters the frame with brash guitar. The song then calms, it loses the flame until its relit. The vocal work is brilliantly simple.

‘Mad Frustrated’ starts with a great guitar sequence marrying together tender vocals with a pounding drumbeat. The lyrics in this song describe a jaded house, full of rusted memories. The whole album is coated in evocative wordplay, featuring lyrics that point at soured love and restless hearts. ‘Gets Harder’ opens with a catchy riff that morphs into a full guitar sensation. The calming vibes come in again. There is even a fit of screaming to give the song a gritty tone.

Dikembe is a band that match together simple but engaging riffs with provoking lyrics that highlight hardships and lost love. The depressive contributions don’t sour the album, they make it ultimately impressive. The album deserves to be on top because it is compelling and sincere. The band are driven to outclass and they’re are inspired to deliver quality. The high rating is deserved.

‘Mediumship’ by Dikembe is released on 5th August on Tiny Engines.