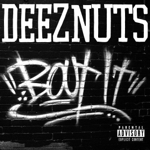 If a band were ever entitled to be described as “brocore”, then that band would be Australia’s charismatic hardcore/rap(ish) outfit Deez Nuts. On third album ‘Bout It’, the quartet continue their brand of pure, fierce hardcore conducted by riotmaster JJ Peters and his adolescent rebelliousness. There’s no place for unwanted subtlety here, where brute force, gang vocals and catchy amp-busters are the only requirements.

Opener ‘Bout It’ is a great introduction to what the band consistently deliver throughout: in-your-face hardcore riffs, Beastie Boys-like hype-man shouts and enough gang vocals to fill several albums’ worth of any given metalcore band. In fact, on occasion the band does veer into metalcore territory with the number of breakdowns rising exponentially with ‘Not A Face In The Crowd’ and ‘Keep On’. ‘Go Fuck Yourself’ is a suitably puerile, yet inevitably catchy, powerhouse of sludgy riffs, complete with ridiculously antagonistic chorus (done similarly on ‘Life You Live’).

There’s also space for some rapid-fire thrash-punk with the power dui of ‘What We Eat Don’t Make YOU Shit’ and the miniature havoc ‘Call To Arms’. The band even indulge in a comedy skit on ‘Don’t Act Like You Don’t Already Know’, in which all members of the band are busy getting high on a variety of drugs and generally sharing some “banter”, if you will. It’s rather silly, but not offensive enough to make it a real nuisance.

The album’s real highpoint, though, takes the form of single ‘Band Of Brothers’, in which their confrontational style is traded for friendly camaraderie and the addition of Architects’ Sam Carter brings a charming sweetness that is sharply in contrast with the rest of the album. Deez Nuts certainly aren’t the most mature of bands, but it’s hard to blame them when they can produce belters such as these with such confidence. They assuredly won’t be everybody’s cup of tea, but they don’t seem to care that much.

‘Bout It’ by Deez Nuts is released 8th April on Century Media.