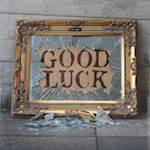 For those who aren’t familiar with Decade, let me bring you up to speed. This Bath quintet have gradually been making themselves known over the last few years with relentless touring, including support slots alongside Deaf Havana, Tonight Alive, A Loss For Words and appearances at nearly every UK alt rock festival you can think of; Warped Tour, Slam Dunk, Sonisphere, Reading and Leeds Festival. Now having crowdfunded their debut album and signed to Universal Music’s Spinefarm Records last summer, Decade are now releasing ‘Good Luck’ Produced by Romesh Dodangoda (Funeral For A Friend, Kids In Glass Houses, Twin Atlantic), ‘Good Luck’ turns out to be a resonating collection of pop-punk that rises above the norm.

Kicking off with the title track, Decade’s energetic and passionate approach grabs hold of you instantly with lead off single ‘Brainfreeze’ being an early highlight, with its pulsating drumming and edgy guitar work. Whilst some bands within the genre concentrate on the “breakdown” or gang vocals, Decade clearly have the knack for writing catchy hooks as ‘Callous’ and ‘British Weather’ quickly show.

With 10 songs coming in at just 27 minutes long, Decade don’t outstay their welcome and thankfully keep the momentum going from start to finish. Although the band’s style doesn’t stretch too far past the standard pop-punk sound, tracks like ‘Woke’ and ‘I Don’t Care’ are mightily impressive and simply keep the feelgood factor going; angst-driven, melodic pop-punk at its best.

Throughout, Alex Sears crafts out a recognizeable voice especially on closing number ‘Fake Teeth’. Instrumentally the track takes a somewhat more laid back approach allowing Sears’ vocals to soar and shine in the chorus, leaving the album on the high point it started at.

Whilst some might be focusing on another debut release from another UK pop-punk band next week (Neck Deep), take my advice and give ‘Good Luck’ a listen as you won’t be disappointed. Decade have produced a record that is thoroughly consistent and does not let up, which gives them the foundation they need to take the step from “rent-a-support” to headliners on a regular basis. A great debut to kick off 2014.

‘Good Luck’ by Decade is released on 13th January on Spinefarm Records.