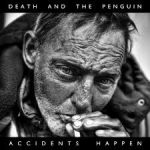 Alt-rock quartet Death And The Penguin have entered life with a statement to make. The Londoners are landing in a competitive scene, but debut EP ‘Accidents Happen’ is an affirmation that there will be no shying away from this challenge. Twenty minutes is all the four-piece give themselves to stake their claim to the role of the capital’s next breakout band. The time is spent making  it known that they’re certainly at home amongst the current crop of talent, but it will take a little more to convince the world that they can rise to the forefront.

‘Snuffed Out’ kicks the EP into life with a dose of your typical toe-tapping rock, decent both lyrically and instrumentally, but the wow factor of ‘Accidents Happen’ is still to come. The later stages of the opener offer a brief change of pace; a momentary flourish in a solid albeit slightly pedestrian track. Perhaps  ‘Accidents Happen’ doesn’t exactly hit the ground running, but it’s a reasonable jog that takes Death And The Penguin into ‘Space 1998’. The EP’s second offering signals a step up in enjoyment levels, with vocalist Tobias Smith leading the quartet into a more consistent form. The work of Andrew Acred is also worthy of a mention, but for the most part ‘Space 1998’ stands out as a quality all-round piece, with each of the four members soaking up their fair share of the spotlight.

A boisterous finale leads into ‘An Opening’, a short interlude which in turn leads into ‘Strange Times’. Harmonious backing to Smith’s lead vocals provide a little extra texture to a track, which otherwise remains fairly standard until a truly scorching solo that ends up coming somewhat out of left field.  The band’s aforementioned wow factor has finally appeared; a delayed impact perhaps but by the EP’s half-way mark, buying into the early hype surrounding the quartet becomes a considerable stretch easier.

‘Bitumen’ adds another new flavour to the four-piece, with group vocals and percussion producing a well-executed temporary change of sound before DATP delve into by far the grooviest number that ‘Accidents Happen’ has to offer. ‘The Words That Maketh Murder’, meanwhile, is a simple but effective pounding to close out a record that really comes into its own over the course of the twenty minutes Smith & Co. dedicated to announcing their arrival. There are similarities to the Scaramanga Six present as Smith croons over the EP’s twilight moments, and a refrained nod to Eddie Cochran’s ‘Summertime Blues’ is what sees the record out. It’s a fittingly confident end to a twenty minute period that sees Death And The Penguin grow from ambitious upstarts to another strong prospect for the future.

The future in question can see the London quartet go one of two ways. The steady progression boasted by ‘Accidents Happen’ gives due course to be optimistic, however, but “go big or go home” is the mantra that DATP need from here on out. Their debut EP is one that shows they have potential by the bucketload, all that remains to see is just how well they can harness it.

‘Accidents Happen’ by Death and the Penguin is release May 5th on Best Before Records.

Death And The Penguin links: Facebook|Twitter|Bandcamp