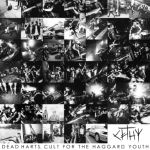 If the heavier end of the UK rock spectrum is your thing, then it seems that Sheffield is the most fertile ground for producing heavy music. Not only is there the arena-conquering Bring Me The Horizon and their bandwagon-jumpers While She Sleeps, but also the more weird and wonderful sounds of the underground of Rolo Tomassi and Marmozets. Latest to emerge from the South Yorkshire production line are quintet Dead Harts, who here follow up their 2012 debut ‘Born Into Rags To Die No Richer’ (cheery bunch, aren’t they?) with sophomore effort ‘Cult For The Haggard Youth’. Boasting influences such as Norma Jean, The Chariot and Stray From The Path, the record fails to incite the sort of adrenaline rush engendered by Norma Jean’s ‘Wrongdoers’ or, well, The Chariot’s entire discography, coming off more like Every Time I Die-lite. And with ETID releasing what will surely be remembered as one of the best albums of this year in ‘From Parts Unknown’, this can only sound paltry in comparison.

Although technically proficient and having several attributes in their arsenal (Matthew Baxendale’s vocal, the layering of Dominic Bass’ bass and Matt Pask’s guitars), this isn’t an album that marks a band on the ascent, but more a perennial support act, consigned alongside the likes of Feed The Rhino to play second fiddle to acts that have the factor that pushes them beyond the sort of lukewarm mediocrity that Dead Harts display here. The sludgy production job of Oz Craggs hardly aids their cause; it clearly attempts to emulate The Chariot’s feedback-induced chaotic bliss, but here it makes highlights hard to pick out from one another. For every hard-hitter like ‘Suicide Cocktail’, there’s the repetitive torpor of ‘Council Pop’ that marks ‘Cult For The Haggard Youth’ as a solid contribution, but one that won’t see them spearhead the South Yorkshire elite.

‘Cult For The Haggard Youth’ is not a particularly bad record, it’s just that we’ve heard it all before; just when you thought we were done with the whole “southern rawk” thing that was the toast of the UK scene circa 2006-08, along comes a song like ‘Leech’ to bring those unwanted memories of Blackhole come screaming back, cowbells an’ all. The album’s eponymous track makes a decent attempt at a rabble-rousing call and response vocal coda, but when it makes exactly the same moves as the preceding track and the following ‘Stripptease’, the tedium starts to set in to close off an uninspiring first half of the record.

The second half of the record doesn’t fare much better; despite the brief reprieve of the aforementioned ‘Suicide Cocktail’ (even though the bridge section takes its chord progression from Spineshank’s ‘New Disease’), ‘Dirty Fingernails’ isn’t much more than meat-and-potatoes mosh fodder, and while ‘Tar’ is a decent excursion into more experimental territory, ‘Nosebleed’ tries its damndest to be the “big set closer” à la their heroes The Chariot, but comes off messy and forced together, rather than the natural progression of the Atlantans. While this second effort from Dead Harts isn’t quite “proud stag”, it’s not quite “oh deer” either (geddit?!) – there are some worthwhile moments here, but the similar nature of most of the thoroughfare makes them hard to pick out. This will do well amongst a younger audience not jaded by hearing a thousand soundalikes on a similar trope, but across the board, Steel City will not find its brightest new hope in Dead Harts.

‘Cult for the Haggard Youth’ by Dead Harts is released on 21st July on Transcend Music.