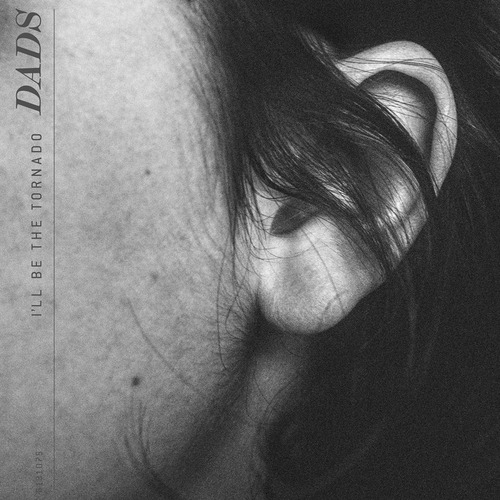 Poster boys for the emo revival, New Jersey two-piece Dads have achieved both critical acclaim and (relative) commercial success on the back of 2012’s ‘American Radass’ and last year’s ‘Pretty Good’ EP.

Now, John Bradley and Scott Scharinger are back, and their thoughts are trained very much on the larger questions in life; on identity, responsibility, loss and everything in between. Lyrically and thematically dense, ‘I’ll Be The Tornado’ is like a deconstructed American literature classic set to pounding drums, intricate guitars and hyper-personal lyrics and, while it doesn’t always work, it’s an exceptional piece of work.

What’s immediately evident, right from the moment you see the muted artwork, is that there’s a whole new sense of purpose – seriousness even – about how Dads are approaching things. Fortunately, the knockabout, ramshackle charm of ‘American Radass’ is still there, but it’s now only part of what Dads are bringing to the table. As a result ‘I’ll Be The Tornado’ is an album which has eyes very much above the scene from which they were birthed – and you get the sense that Dads could just be about to make the jump into the wider landscape.

It helps that ‘I’ll Be The Tornado’ gets off to the best possible start. ‘Grand Edge, MI’ is a wonderfully low-key affair for the first two minutes; a neurotic stream of consciousness which sets the lyrical tone for the album. By the time the pounding drums kick in you’re willing ‘I’ll Be The Tornado’ to be a huge success. The fact that the final lyrics are about the fear of dying alone just emphasises the themes Dads are working with – and it’s both poignant and highly effective.

It’s perhaps a bit of a departure from their previous sound, but musical growth can be seen throughout ‘I’ll Be The Tornado’. The maelstrom of guitar and drums is sufficiently tempered and the lyrics and vocals are really pushed to the fore, while they’re not afraid to play with tempo and structure. And, even when they cling to the past on the punk blasts of ‘Sold Year/Transitions’ and ’You Hold Back’ they sound re-energized and fully-focused. Played for laughs, it is not.

The highlight though is the sprawling, rhythmic and tempestuous ‘But’. It absolutely commands your attention and demands that you obsess over the lyrics. It’s beautifully written and expertly executed and just throbs and pulses with emotion. ‘Take Back Today’ is a close second, recalling the triumphant bluster of fellow two-piece Japandroids at their fuck-it-all best.

The beauty of ‘I’ll Be The Tornado’ is that Dads have managed to make a highly personal and emotive record which stands every chance of transcending the ‘emo’ tag. A more traditional rock’n’roll approach has certainly smoothed the edges – but in making the leap they’ve made one of the best comebacks of the year.