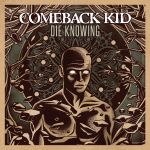 Comeback Kid have attained a large fanbase due to their ability to pull together two fast and furious genres of music as seamlessly as only they can. Many bands like to call themselves ‘melodic hardcore’, and it’s a convenient label for music writers. But the Winnipeg outfit truly fit the glove. Their sound is punishing and aggressive, yet they have a love for melody and their musical structures are creative and interesting. Having said all this, I have to admit that following the release of ‘Broadcasting’ I was disappointed.

Original vocalist Scott Wade had left and Andrew Neufeld dumped the axe and took the reins. His voice was howling and bass-y and immediately made them seem more metallic. This in itself wasn’t a bad thing, but perhaps some of the elements that made people so passionate about them originally were missing. Then came 2010’s ‘Symptoms + Cures’, which combined the best elements of their early material with their heavier work, and Neufeld’s vocals felt layered and expansive, having grown into his new role.

This brings us to their latest release, ‘Die Knowing’: their finest work since 2005’s ‘Wake The Dead’ and definitely their most accomplished release to date. Absolutely everything a Comeback Kid devotee, a hardcore fan or just anyone who loves fast, angry yet positive music could wish for is included here. The ballsy, angst-ridden attitude of debut ‘Turn It Around’ is woven into the fabric of the heaviest material they’ve ever written, and it sounds absolutely enormous.

‘Die Knowing’ is the atmospheric opener: steadily growing, brooding and full of menace. This reaches a crescendo and then briefly flat-lines before second track ‘Lower The Line’ drops like a ton of bricks, and all hell promptly breaks loose. A furious angle-grinder of a riff levels everything in its path before Neufeld’s rasping, gravel-gargling cries immediately eliminate any concerns you ever had about his voice. The man sounds absolutely on fire.

‘Wasted Arrows’ is snotty and snide and swings along with the pugilistic vigour of a classic hardcore track, before the gang-chant of “WA-STED-AR-ROWS! WA-STED-AR-ROWS!” sends mosh-pits across the world into an incandescent frenzy.

Their identity has shifted sharply over the years from early beginnings as a flagship band on Christian hardcore label Facedown Records to their current status and popularity. Neufeld has since admitted those old ties are not a part of who they are today.

In keeping with the change, ‘Should Know Better’ is a rip-roaring party-time track, with the kind of three-sheets-to-the-wind, whirlwind riffage that Every Time I Die would be proud of. The video they’ve done for it is all about excess, and it’s refreshing that they’re being so honest about this transition in a scene that is critical of those it sees as ‘forgetting their roots’.

And the big hitters just keep coming and coming. ‘I Depend, I Control’ is a high-velocity minute and a half of pure adrenaline, whilst ‘Somewhere In This Miserable….’ Is a blistering, razor-sharp and swaggering slice of hardcore’n’rolling heaven.

Even the weaker moments, such as the slightly repetitive ‘Didn’t Even Mind’, can be forgiven because there’s something on every track to look forward to; something that makes you think “that bit is going to be incredible live”. On the aforementioned track it’s the breakdown at the end, which is hardly surprising considering Comeback Kid are the undisputed kings of this particular device.

‘Full Swing’ features original vocalist Scott Wade, and whilst it’s absolutely brilliant to hear him contribute, the more interesting aspect is that you realise he’s not missed anymore. If that were a track on ‘Broadcasting’ I’d be wishing he’d come back into the fold and save the band from stagnancy. Now I’m just wishing he would come back anyway because the two vocalists sound fantastic together.

‘Die Knowing’ is an important album because it’s the product of a band who have risen from niche underground prominence to recognition beyond the world of punk rock, yet have never, ever compromised their sound. Compare them to say, Rise Against, who happily lost their edge when the majors came calling. That hasn’t happened yet for the Canadian crew, but if it did they deserve it and you can bet they wouldn’t take any ‘tone it down’ bullshit. Buy this, now.

‘Die Knowing’ by Comeback Kid is available on the 4th March on Victory Records.