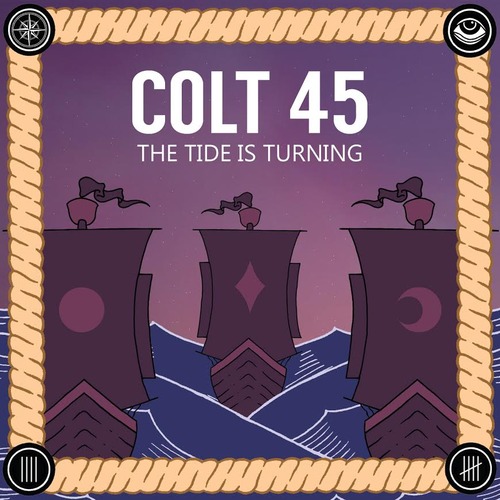 With a name like Colt 45, you might expect this band to deliver something powerful, energetic and maybe even something with enough forward momentum that it might bowl you over. Alternatively, you could be hoping for material as good as the Afroman classic of the same name. Once you hear new album ‘The Tide Is Turning’ however, you’ll know it is anything but, as you vow to never let linguistic similarity get the better of you again.

Colt 45 has managed to craft 38 minutes of some of the most painfully generic rock in recent times. Full to the brim with unoriginal, uninspired power chord riffs, it would be easy for this album to pass you over. Sadly, it’s so overwhelmingly vapid it’s actually capable of being noticed and heard above the groans it should induce on anyone with functional ears.

But it’s not just the guitars. All the mundane instrumentation is topped by vocals that miserably fail at the whole gritty, half shouted half sung approach. It doesn’t even manage to reach Liam Gallagher rip off territory. The lyrics are no better, so bland as to be the epitome of common denominator. Songs like ‘959’ suck all the soul out of anti-work sentiments that should be emotionally powerful by virtue of their universality, something that a band like Refused was immensely successful in doing. This is most definitely not the shape of punk to come they might have had in mind. This song in particular becomes painfully ironic, being as mediocre and safe as the lifestyle they criticise.

Furthermore, ‘The Tide Is Turning’ is so square that if it could be likened to any physical object, it would be to toy blocks. But not toy blocks with any edge to them. We’re talking blocks made out of unfeeling rubber with rounded, unthreatening corners that will inspire so little enjoyment that it hurts . Whilst this music is child’s play, no one of any age should be subjected to it, except for especially harsh auditory punishment.

‘The Tide Is Turning’ by Colt 45 is out now on Visible Noise.