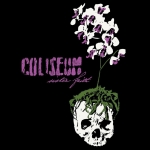 Coliseum’s fourth album, ‘Sister Faith’, drops at the end of this month and it is a damn good one. Full to bursting with fuzz-laden riffs, driving drums, and powerful vocals, this record will make for excellent listening across the summer months. The album absolutely explodes into being; dirty guitars come crashing from the start as ‘Disappearing from Sight’ sets the tone for the rest of the record. Throughout ‘Sister Faith’ what Coliseum showcase is their ability to keep things fresh. For every time something seems predictable, there’s something you didn’t see coming, it can be something as simple as an unexpected chord that keeps the entire album safe from growing boring.

Something else Coliseum seem to have made a habit of is fantastically gritty bass intros. ‘Under the Blood of the Moon’ comes with the pick of the bunch. It’s thunderous sludge and soon matched by similarly roaring backing. This album twists and turns often without ever straying too far from the solid path set from the beginning. On bass or guitar there’s a riff for every occasion on ‘Sister Faith’ – provided every occasion calls for a wonderful amount of distortion and grit, something every occasion could probably do with.

‘Late Night Trains’ is a stand out track. Those fuzzy riffs are at their mighty best here and the vocals nail it harder than ever before, with swells and drops rarely matched elsewhere on the album. Again, on ‘Everything Glass’, Coliseummaintain this fire whilst flitting seamlessly between vocals so huge they’re almost sing-along and slower sections so grimy you’ll think back fondly on your last shower. Well worth checking out if you’re interested in Coliseum.

‘Sister Faith’ isn’t always so strong, however; occasionally it does allow itself to feel a little repetitive. I do love a dirty bass intro but the three in a row of ‘Love Under Will’, ‘Under the Blood of the Moon’, and ‘Used Blood’ do stand out as a little too continuous. These are three mighty songs, with three mighty basslines, but three in a row gives the impression that perhaps no one gave a thought to the fluidity of the record as a whole. As well as this one relatively minor complaint, the vocals occasionally hit an unusual step – on ‘Love Under Will’ I found myself imagining something of a Punx Jarvis Cocker moving his way through the track. They’re not bad vocals by any means, they just sit a tad odd.

Regardless of these negligible matters this is a strong album from start to finish, a distorted monster straight out of your sleazy nightmares.

‘Sister Faith’ by Coliseum is out on the 30th April on Holy Roar Records in the UK and on Temporary Residence Ltd. in the US.