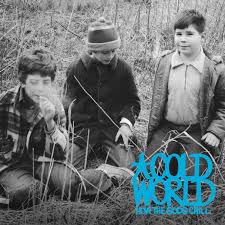 Hardcore; it’s a genre that has split itself evenly into various different styles over the last 30 years since its inception. Yet, like any genre, there’s often an oversaturation caused by so many bands replicating a certain style. So in this case, I’m referring to what the critics would describe as “tough guy style” hardcore. Let’s face it, use of the same riffs, rhythms, breakdowns, pace, and what have you, is bound to get stale. That’s unless the band in question has a degree of freshness to them, a spark that makes it not so mind numbingly boring to listen to. Cold World appears to have that fire on their long awaited second album, ‘How the Gods Chill’.

Compared to previous album ‘Dedicated to Babies Who Came Feet First’, ‘How the Gods Chill’ excels in consistency and impact. With help from renowned producer Will Yip, the band’s confidence has been captured here, plus it doesn’t feel as flimsy, a tighter affair compared to the output of their contemporaries. The groove and bouncy hip hop influence feels like a natural appendage to the hardcore structure. ‘The Real Deal’ is a good example of this concoction, making you want to lose your shit in the pit completely (pardon my language). ‘Cracks of Hate’ is another strong example, but in the most obvious way as it seamlessly breaks down from hardcore grit into hip hop beats and wordplay featuring rapper Meyhem Lauren. There’s a sense of fun in this style, providing a contrast to the bleak, harsh reality surrounding the lyrics.

Other styles and moods that accompany the record include the blistering heaviness and a taste for melody. ‘Never Knows Best’ retains the latter trait, what with its melodic groove clamping onto the listener from around the corner as it chugs past. ‘Never’ on the other hand is a strong example of the former. It thunders across mid tempo with drums and beefy strums, before teetering on slight melody in the chorus, knocking you into submission as the breakdown barges in. A personal favourite of mine is the rhythm biting ‘Omega’, led by guest vocalist George Hirsch of Blacklisted fame. It’s a track that would probably make Snapcase jealous, especially since it features one of the best frontmen in hardcore from the last decade. Yet it doesn’t all come into fruition till penultimate song ‘Hell’s Direction’. Escorted by a booming beat and lyrical waxwork by rapper Kool G Rap, the song unleashes its fury, crushing riffs and Dan Mill’s vicious vocals, knocking you down marvellously. ‘Hell’s Direction’ is pretty much an amalgamation of all their influences, wrapped into a tenacious package.

Whilst ‘How the Gods Chill’ isn’t exactly ground breaking, it finds Cold World being one of the freshest sounding acts within a bloated scene. The riffs retain the right amount of raw heaviness, the drums slam smashingly and the vocals are gnarly as fuck. More importantly, with help from Will Yip, the band has captured the confidence found in their live shows, finally delivering material worthy of their name. The hip hop influence flows much more coherently than it once did, adding a sense of fun, which contrasts neatly with the serious and personal themes in the lyrics. One criticism would be that the clean vocals feel cheesy at first. Perhaps this is down to me not being a Life of Agony fan, but this melodiousness does grow on you upon repeated listens. Overall, Cold World has made one of the best hardcore releases of 2014 so far and I look forward to what they put out next.

‘How the Gods Chill’ by Cold World is out now on Deathwish, Inc.