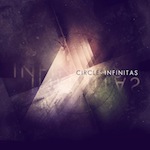 Australian metallers Circles are finally unveiling their long awaited debut full length ‘Infinitas’ this October. It’s been 4 years in the making with the Melbourne-based five-piece having formed in 2009 and although the band did manage to keep things ticking over with the extremely well received ‘The Compass’ EP back in 2011, the hefty fan based they’ve built up over that time will be hoping it was worth the wait.

In the press release, Circles describe themselves as ‘for fans of: TesseracT, Faith No More and [the one and only] Michael Jackson’. The first two are of course not all that shocking. I mean, before listening to the record and going off the band’s description of themselves alone – can I see fans of TesseracT liking this? Yes. Faith No More fans? Sure. It’s the Michael Jackson part that confuses me. Skip forward to after I’ve listened to this record and I must admit, for the first minute or so I couldn’t believe what I was hearing. The slightly electronic and ever-so melodic intro to opening track ‘Erased’ really had me thinking that this was going to be something quite spectacular. If you can successfully combine influences of Michael Jackson and Faith No More then you definitely have my attention. Unfortunately, although both those influences were present – in the opening track more than the others – it was the TesseracT side of things that over-shadowed the rest, and that’s exactly what I didn’t want to happen. I am of course only using those artists as a frame of reference to explain the three types of ground that Circles cover, and before I receive some kind of black lash for comparing the band to any of them, let’s not forget that they are three points of reference that Circles supplied themselves in the press release.

Even with the main overall sound of this record being the one side of Circles that I personally wanted to hear the least, I was actually fairly drawn in by the first song or two. Musically, the ‘lighter’ parts throughout the whole record are well written, contain nice melodies and a sense of purpose. The heavier parts are also very well constructed and don’t seem forced, or like they have been put there for no reason other than to melt the face of the listener. While these are all good qualities, it’s perhaps a bit of a catch 22 when you find every single song containing them. It leaves none of the tracks really standing out to me. While they all probably sound very nice on their own, or at stretch on an EP containing four or five songs, it’s when they are put next to each other on a full-length album that spans nearly an 60 minutes that they all start to seem a little dull and blend into one. It’s a known fact that a lot of full lengths have a few filler songs, but they also have those two, three or four stands out tracks that keep the album alive. While I definitely feel it’s harsh to say all the songs on this album are filler (as I said, they are actually pretty good when taken out of the context of an album), I do think it’s safe to say it lacks those stand-out tracks that could keep ‘Infinitas’ interesting.

Overall, I feel like the lack of a catchy hook or difference between individual tracks lets the record down a bit. That said, there are more positives than negatives. When singled out, the songs are well put together, well-produced and fun to listen to. The mix of influences is for the most part executed very well. I mean, let’s not forget that fusing genres is a very difficult art to master and while Circles are predominantly a metal band, there are hints of far more melodic genres sprinkled throughout each song and you always run the risk of mixing too many colours together and ending up with brown. Circles managed to avoid that, so for their song writing and originality they should definitely be applauded. I’d recommend checking out a few songs and seeing if it’s your cup of tea. If you don’t like the sound of one of two of them, chances are you won’t like the sound of the rest.

’Infinitas’ by Circles is out now on Basick Records