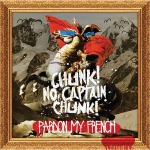 Everything about this second album from French quintet Chunk! No, Captain Chunk! just screams out to be hated. There’s that terrible name, which takes the trophy for “Worst Clichéd Pop-Punk Reference To An 80s Movie” (in this case, treasure-hunting, truffle-shuffling classic The Goonies). There’s that abysmal cover, which is a lame parody on an even worse cover for Coldplay’s ‘Viva La Vida.’ There’s the fact that their press release cares to mention their Social Network stats, “Media Support” and “Brand Partnerships”. There’s the fact that we’ve heard all of this before – they unite the “pop-punk with beatdowns” of A Day To Remember and Four Year Strong with the patented Rise Records metalcore crunch. And yet, despite all these valid reasons for C!N,CC! being among the worst things to taint these ears, ‘Pardon My French’ is actually – dare I say it – pretty okay.

Don’t get me wrong, this is not a good album. Not by any stretch of the imagination. It’s still hackneyed, monotonous gubbins, but while listening, you get the feeling C!N,CC! know this about themselves, and yet have the most fun making this trivial & banal tripe nonetheless. ‘Haters Gonna Hate’ may as well be the band’s raison d’être, as this songs demonstrates how little they seem to care about what people think about them. Their key demographic isn’t the seasoned music listener, it’s the kids who want music they can lose themselves to, where they can pogo one minute and headbang the next, and in this aspect, Chunk succeed triumphantly. This is spectacularly dumb, with all the deftness and subtlety of a breeze-block to the face, but by owning and even reveling in their belligerent genericism and extreme fusion of genres, Chunk! No, Captain Chunk! get the most marginal of pass marks from this writer – an F+, if you will.

Another reason for this album’s success, in spite of its glaring and obvious faults, is the appalled reaction this will inspire in people with any sort of sophistication to their music taste – if a twinkly-emo fan ever heard ‘So Close And Yet So Far,’ they’d probably claw their own face off in rage, as the basis for this slick, Autotuned-as-hell ballad is unmistakably rooted in Kinsella Brothers territory. If you have a shred of sanity or dignity, you won’t touch this record with a ten-foot bargepole (“Already Heard – we listen to the records so you don’t have to”), but for a younger generation that do not yet have any pretence of judgement over what’s tasteful and what is not, so long as it’s fun, ‘Pardon My French’ is ideally suited. Now I’m off for a long and cleansing shower.

‘Pardon My French’ by Chunk! No, Captain Chunk! is available now on Fearless Records.