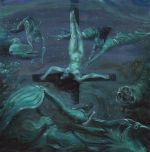 One of those bands that have been at the forefront of UK hardcore music, Brutality Will Prevail, have stepped away from the DIY ethos a bit with new record ‘Suspension of Consciousness’.

This being the first record with new vocalist Louis Gauthier, which brings a whole new dimension to the band and has seen them lead in a different direction. Gone are some of those long sludgy riffs, replaced by my clean cut chugs and drum fills. It appears that now the band are on a ‘Major’ label, they have taking things a bit more seriously in their recordings and it comes across clearly right from that start of this record.

Though a change in direction is sometimes great to keep a band fresh, unfortunately some of the essence that makes Brutality Will Prevail who they are has been lost. A key factor is the very oddly placed melodic vocals which are present throughout the album, but particularly in ‘Escapist’, which kind of dampens how hard hitting the rest of the song is. It is almost as if Brutality Will Prevail are paying homage to the nu-metal era of the 90s just in a very strange way.

If you were expecting this to be a straight follow on from ‘Scatter The Ashes’, and be full of breakdowns that make you want to punch someone in the face, you will unfortunately be disappointed. This is not to say that ‘Suspension of Consciousness’ is not a good album, they just have to be taken as separate entities. This new offering from the Welsh kings is more in tune with its metal side, rather than the beat-down hardcore band we have come to know.

For someone who has been a fan of Brutality Will Prevail from the beginning, this may not be the album for you, but on the flip side if you are just getting into this sort of music then ‘Suspension of Consciousness’ would not be a bad place to start.

‘Suspension of Conciousness’ by Brutality Will Prevail is out on the 7th April on Siege Of Amida and Century Media.