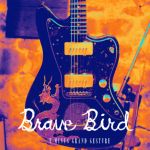 There is no doubt that Brave Bird have been compared to Brand New in the past, they’ll be compared to Brand New in the future, and it probably annoys the hell out of them. I have essentially already compared them myself, so we may as well just go the whole hog and get it over with: they sound like Brand New. You can’t really write a review without giving points of reference, and in terms of their sound, the aforementioned band is a big fat point of reference.

This is the Michigan outfit’s second EP following their debut full length ‘Maybe You, No One Else Worth It’, released last year. It sees the return of original second guitarist Matt Terrigan to the band, and the pairing between him and vocalist/guitarist Chris Lieu allows for more complex, layered riffs and rhythms that add depth to the sound.

Whilst not as lyrically savvy as their peer-who-shall-not-be-named, and maybe not as pop-smart, they have plenty of attributes some of which are perhaps more apparent than in that band. The quality of musicianship is high, which is demonstrated in opening track ‘I Don’t Wanna Know’, with its finely meshed guitar work and inventive drum patterns. Some Adam Lazzara-style yelping also appears, suggesting there’s more than one Long Island influence at work here.

‘Rekindle’ feels in some capacity quite stripped down and raw, but it’s rolling, repeating vocal melody give it a pleasant brooding quality, and that all important sadness sweet-spot that makes your heart do a little back-flip is triggered by the wrenching riffs that are drawn over Lieu’s sombre tones. Chris himself has plenty of dimensions to his vocal however, and other moments are much more upbeat.

‘Hard Enough’ for example, features a far more cheery, poppy vocal from Lieu, and also some wonderfully fleet-fingered fretwork, with some great vocal harmonies drifting around beneath the main melody. This demonstrates some real musical flexibility which is obviously important for any band who are genuinely trying to make the shift from just plain good to great.

There are times that Brave Bird sound a little limited, and you feel that more could have been done with the track in terms of the passages of its development and making it feel like a completed act. ‘Open Up Your Mouth’ is also a total dud of an acoustic track which really just goes nowhere. But despite this, Brave Bird are an intelligent and intensely enjoyable band, and despite the oh-so-obvious comparison, they can still stand up on their own two feet and not just on the shoulders of giants.

’T-Minus Grand Gesture’ by Brave Bird is out now on Count Your Lucky Stars.