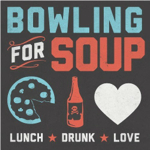 Here’s some unbelievable facts for you; Bowling For Soup are nearly 20 years old as a band. Justin Bieber has been a person for as long as Bowling For Soup have been a band. As if that wasn’t enough, this is their FOURTEENTH album, meaning you could listen to a different Bowling For Soup every day for a fortnight – presuming, of course, you don’t hurl yourself onto the nearest railway track by Day 5. And, perhaps most unbelievably of all, the band that troubled the Top 10 of the UK Singles Chart just once back in 2002 with ‘Girl All The Bad Guys Want’ are still considered big enough to play the Hammersmith Apollo. That means that FIVE THOUSAND people are willing to part with their cash to see them in London alone. Granted, it’s their last ever UK tour (yeah, sure guys, of course you can afford to drop a cash cow this juicy), but it’s still jaw-dropping – your favourite band probably broke up because they couldn’t afford to keep playing dive venues, and Bowling For Soup can still play the Hammersmith Apollo. Oh, and the fat guy’s still really, really fat, but I guess that’s not very unbelievable, they are from Texas after all.

if you haven’t listened to a Bowling For Soup album since 2002 (and why would you unless you were some freakish man-child who thinks flame shirts are still cool), it sounds exactly like you’d expect a Bowling For Soup album to sound – hooky and trivial power-pop with gags on a sophomoric level somewhere between a Judd Apatow movie and Tenacious D. In the decade since ‘Girl…’, there’s been a smattering of hits that have somehow entered my conscious and raised a half-smile, such as ‘Punk Rock 101’, ‘1985’ and ‘High School Never Ends’. The thing is with ’Lunch. Drunk. Love’ is that it’s got no singles, nothing that would warrant constant rotation on Kerrang! TV (is that even still going?) – hell, barely a song that moves out of second gear.

Opener ’Critically Disdained’, ’I Am Waking Up Today’ and ’Envy’ exact some gusto, along with the amusing ‘Right About Now’, which sounds like Sum 41 covering Cheap Trick’s ‘Surrender’, but overall this band sound exhausted. Vocalist Jaret Reddick sounds like a broken man – you know how all the cool pop-punk bands talk about how much pizza they eat? Reddick’s voice used to be full of pep, vim and vigour, but now sounds like the wheezing throat of a man that’s been eating pizza (with extra cheese, stuffed crust) for 20 years and feels like Mr Creosote – by the end of this record, you hope he had a nice cup of tea and a sit-down.

The band have taken to mostly doing acoustic tours these days (surely anathema to a group who have gained their fame through chunky riffs, but what do I know? Bowling For Soup are clearly a slicker money-making mechanism than I), and a lot of songs seem geared towards that – far more mid-paced acoustic ballads than a band of their ilk should be writing, anyway. It’s exacted more years out of them than music this superficial ought to, and is certainly more befitting of a man in his early 40s than blowing raspberrys and talking about “boobies”, but it’s just a little saddening that apparently we Brits lap up this widescreen M.O.R. just as much as American “rock radio”.

if you’re an existing fan of Bowling For Soup (and if you are, good luck with learning to breathe through your nose, I believe in you pal!), you’ll lap this album up and its shit pun title (ha ha, I get it cos they’re chunky guys, they obviously like lunch and getting drunk and they wrote some love songs, and “punch drunk love” is a popular idiom, lol!), but for the average Already Heard reader, the facts at the top make depressing reading. That a band this one-dimensional and throwaway have made fourteen records is as admirable as it is sobering – think how many inspirational bands have lived and died in that time because they meant so much to far too few. It’s unfair to focus all the ills of the music industry on Bowling For Soup; they’re fairly harmless after all, but their continued existence writing such uninspired and meaningless twaddle seems unjust somehow. When your favourite bands start making asinine comedy rock because that’s where the secure cashflow lies, don’t come crying to me.

‘Lunch. Drunk. Love’ by Bowling For Soup is out on the 30th September on Que-So Records/Brando Records.