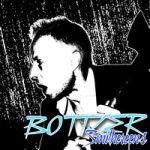 Bottler’s EP is one of the most humourous, fun EPs I’ve heard in a long time. Sounding like a mix of Frank Carter’s Gallows, John Cooper Clarke and a 1960’s kitchen sink drama, everything about ‘Smithereens’ has a distinctly London feel.

Opener ‘Ex-Members’ is a great start, introducing the listener to the band’s style. A knowing song about being in a band and being broke; they describe themselves as “the ex-members of the bands you never knew”. The band are adept at these sarcastic touches in their songs and this  song ends with a classic sounding, “we will never give it up” which is cut down with “at least until responsibilities get in the way” – a twist on the usual life on the road anthem.

What separates Bottler from the pack is the timelessness of their songs, songs like ‘Mastermind’, a tongue-in-cheek song about being a criminal mastermind which starts with “threw a brick through the window” and quickly escalates to “killed someone”, could have been written in any time period. The wry use of a prison style harmonica and the dead pan London delivery of each line keeps it fresh, without slipping into overly-emulated Gaslight Anthem faux-retro territory.

While religion is certainly a bit of a soft target these days, ‘No Questions Please’ is still a sarcasm-dripped criticism of organised religion. Declaring “our greatest trick was to convince the world that the devil and hell exist”, the whole song is a fairly venomous attack, though you’d be hard pressed to find someone to be offended by it.

The only flaw in ‘Smithereens’ is that some of the production sounds terrible, the drumming across some of the songs is brittle and tinny, which distracts from the great lyrics. Overall however, ‘Smithereens’ is rough, scrappy and full of promise – a bit like London itself really.

‘Smithereens’ by Bottler is released on 24th March via Disconnect, Disconnect Records.