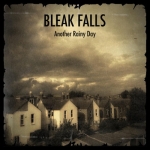 Sussex five-piece Bleak Falls release their début ‘Another Rainy Day,’ a six song EP that shows the band might need a bit more work before they can gain a big following.

The biggest problem with ‘Another Rainy Day’ is the lack of interest on each track. ‘Morning Light’ the first song after the unnecessary intro, it essentially lays out what the band is capable of in this album. The very basic rhythms and arrangements make them sound like amateur musicians playing around for fun. ‘Chapter Eighteen’ and ‘Rollin on 60’s’ are interchangeable, with the same repetitive rhythms and the same notes and arrangements as the previous tracks. The songs are filled with “filler,” just with extended chords and some random screams that don’t actually lead up to anything bigger. It’s all very basic and boring.

Bleak Falls seem to struggle with songwriting. It takes a lot of work and experience to be able to write songs with lots of dynamism, interest, and that showcase talent, and this band isn’t quite up to the level of talent it takes to turn out good songs. ‘Dear Brother’ does show that the boys in the band do know how to play their instruments. There’s a bit more going on in this song, with some interesting guitar parts, but there’s no vocals until about two minutes into the song, making the track sound like a bunch of guys jamming in someone’s garage.

It’s just hard to take Bleak Falls seriously. It’s clear that they need more practice with everything from songwriting, lyrics, and instruments. This isn’t to say that they’re a lost cause, because there are some moments of talent that show through in some of the tracks, but overall there isn’t enough on ‘Another Rainy Day’ to make them a popular, well-liked and respected band…yet. A début EP is always a tough release, because the band usually does get dramatically better as they grow up and figure out what they’re good at. So, you might want to skip ‘Another Rainy Day,’ but don’t count this band out quite yet.

‘Another Rainy Day’ EP by Bleak Falls is released digitally on 10th December.