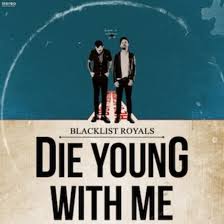 Blacklist Royals’ new album ‘Die Young with Me’ captures the essence of southern American Rock and Roll. Founded by twin brothers Rob and Nat Rufus, the heartfelt lyrics of love and loss resonate throughout the album. Such themes are especially poignant here with an insight into the brothers’ story, as Rob battled lung cancer at the tender age of 17. Understandably, a mixture of uncertainty, daring optimism and profound grief take centre stage.

‘Righteous Child’ opens the album with its sole guitar illuminated by the hum of the organ, yet features delicate notes provided by the piano. The loose melancholic guitar strums are permeated by the running bass line allowing the feeling of intimacy to build before the awaiting vocals. The minimalist and repetitive approach draws greater attention to the vocals when they begin. Subtle changes in the track such as frequent tempo changes make the track of greater technical interest. This particularly highlights the growing maturity of Blacklist Royals in their crafting of individual songs. For this album, the approach was to sound “like two brothers in a room playing music together” and the connectivity of this is certainly achieved with ‘Die Young with Me’.

The garage-inspired title track ‘Die Young With Me’ was the first to develop, and poignantly captures a stirring combination of grief and hope. The energy of this track is particularly notable with what is a dark theme about being seriously ill as a young person. The organ has a diverse quality fluctuating between warmth, hope and sadness. The song ends with no sense of closure with the fading of the instruments reflecting a similar feeling. This track is juxtaposed with the subsequent track ‘Hearts On Fire’, with its quickened pace and lighter tones. It captures what it’s like to be young driving along an expansive highway with little care, but the positioning of such tracks together, on a more personal and intimate level, signals the inconsistency and uncertainty of what must have been such an unsettling time for Blacklist Royals’ founders.

Blacklist Royals’ album ‘Die Young With Me’ is a strong record in its own right. However, the work of producer Ted Hutt (The Bouncing Souls, Lucero, The Gaslight Anthem) has not gone unnoticed as the band do distinctively sound like such bands, particularly The Gaslight Anthem. It would have been preferable for some of the songs to be constructed in a different manner to really give it standing power. It is not a poor album but despite its unique theme it lacks that real original element.

‘Die Young With Me’ by Blacklist Royals is out now on Krian Music Group/Universal Music Group.