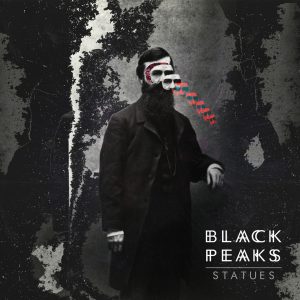 It’s been a year since we were introduced to Black Peaks. Ever since ‘Glass Built Castles’ arrived, the anticipation for their debut album has continued to rise with every single, tour and festival appearance that followed. So after the long wait, ‘Statues’ is set to be unleashed to the masses, yet are they prepared for the sheer impact Black Peaks put on show?

The aforementioned ‘Glass Built Castles’ opens the album with a welcome sense of familiarity. Pleasant harmonies give way to thunderous, stabbing guitars in the chorus with Will Gardner’s extremely impressive vocals taking the spotlight. From here on in, you’re taken on a thrilling musical journey that ebbs and flows with conviction.

It is no doubt ‘Statues’ offers plenty of twists and turns; a trait that the quartet bravely pull off with confidence for a debut effort. From the blistering ‘Set In Stone’ with its scathing vocals to ‘Drone’ and its slow-burning, momentous aura to the apocalyptic ‘White Eyes’, Black Peaks push themselves and challenge listeners throughout.

The combination of the band’s musical ferocity and Gardner’s exceptional vocal talent is simply spectacular. On tracks such as ‘Crooks’, they have you on tenterhooks as they capture the lyrical fear through airy percussion with the chorus serving as an emotional release; “take what they sold, give what they took away.” It’s the seven-minute ‘Hang Em High’ that truly captures Black Peaks’ musical ethos; one moment it sways on calm harmonies, the next it thrives on brutal riffery and harsh vocals leaving you elated.

Through their bold determination and the album’s overall large, mesmerising tone, Black Peaks have delivered a record that is ideally significant. ’Statues’ demolishes itself from the confines of progressive math-rock and sees Black Peaks produce a statement of intent.