Album Review: Ben Marwood – Back Down 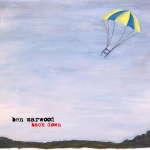 Instrumentation has never been the forte of folk bard Ben Marwood, who prefers the austerity of recording alone in a room with an 8-track. In fact, despite the simplistic quality of his songs, a lot of debut album ‘Outside There’s A Curse’’s charm came from the grainy, lo-fi quality of its sound. However, converted critics were largely convinced by the cynical troubadour’s distinctive brand of angsty and observational brand of lyrical work. Marwood made a name for himself for his effortless ability to jump back and forth between themes of personal turmoil (largely fuelled by self-hate, it appeared) and scornful examinations of “extra-personal” subjects.

The application of a more polished, studio-formed, sound is the biggest change on sophomore album ‘Back Down’, as Marwood does away with the more forgiving “Bon Iver” aesthetic. A brave move from the thirty-something minstrel, whose somewhat monochrome voice consequently suffers from sounding, on occasion, a little off. However, not only is Ben Marwood’s bitter lyricism left unscathed from the transformation but it is also applied on a greater variety of soundscapes (though not to the extent that Frank Turner has on recent albums). Note for example this diverse handful of tracks: the sweet minimalism and touching wordings of short opener ‘For the Skin and the Bones’, the tastefully country-tinged ode to aging ‘We Are No Longer Twenty-Five’, and the rockier full-band foundations of ‘I Promise That It’ll Be Okay’.

For the most part though, Marwood sticks with finger picking chords on an acoustic guitar and letting the strain in his voice show. His critical eye is as astute as ever on highlight ‘This Industry Eats Its Young’, a track that feels perfectly balanced between personal tale and an insider’s scathing criticisms of the music industry’s business model. Yet he is also capable of putting “politics” to the side and indulging in some unapologetic sweetness on tracks like ‘Murder She Wrote’, but he’s nonetheless at his best when tinged with a hint of cynicism (see the great ‘An Escape From Yeehaw Junction’).

Marwood might have been pigeon-holed as doomed for second-place in a model where new ‘alternative-y’ singer-songwriters are made to strive to fill a Frank Turner-shaped mold, but his sophomore album allows him to emerge very much his own beast. Despite the light experimentation with fuller instrumentation, some will still find his style rather too simplistic, but it definitely won’t alienate the already converted. Sharp as ever, though perhaps a touch more optimistic than before, Ben Marwood is a class act.

‘Back Down’ by Ben Marwood is available now on Xtra MIle Recordings.