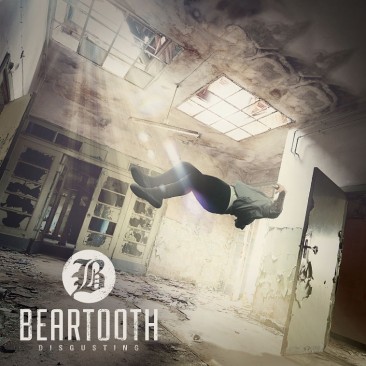 Where do I start with Beartooth? Well lets start with the basics. On paper, Beartooth is the hardcore/punk/metal project of 21-year old Caleb Shomo, formerly of US now-defunct US “electronicore” band Attack Attack! Originally started out as a “joke project,” Beartooth and Shomo find himself riding a wave of high expectations with this debut full-length, ‘Disgusting’, leading the charge. Having being touted for big things by major publications and “industry insiders,” how does ‘Disgusting’ shape up?

Well despite writing, performing, producing and mixing the entire record, Caleb doesn’t come off as self-important and ‘Disgusting’ isn’t some form of uptight, self-absorbed form of artistic expression. Instead he’s produced a record that is raw and aggressive yet offers huge, anthemic moments that sees Beartooth covering a range of hardcore, metal and punk.

From the opening moments of ‘The Lines’, you’re welcomed by a surging force of rapid drums and aggressive vocals that build to a clean chorus before heading into a decent-yet-standard breakdown.

One characteristic ‘Disgusting’ does have is unrelentless energy. Tracks like ‘Beaten In Lips’, ‘I Have a Problem’ and ‘Relapsing’ pummel you with ferocious urgency.

Early highlights come in the form of ‘Body Bag’ and ‘In Between’. The former stomps it way through the verse before producing one of the albums best lyrical hooks; “If I could set the clocks back. I wouldn’t be headed for a body bag. One life and one decision. Make sure it ends with you still living.” Whereas ‘In Between’ is perhaps one of the most “accessible” tracks on the record, with subtly polished production, Shomo has nicely combined the raw heaviness with a (near) radio-friendly chorus that simply works.

Stylistically Beartooth aren’t doing anything revolutionary, yet Shomo’s care for each song somehow leaves you hooked from start to finish. Later songs like ‘Me in My Own Head’ and the noticeable ‘Keep Your American Dream’ sound fucking huge! Bombastic drums and joined by monstrous guitars and towering vocals that sees Caleb giving a 100 and 10%.

The final track, ‘Sick and Disgusting’, sees Caleb at his most personal as screeching guitars and tribal-like drums, giveway to Shomo’s despairing vocals where he exclaims “I just wanna feel loved!” and later crying with the closing line of “Daddy I don’t want to be sick and disgusting.” For a final impression, you get the feeling that Shomo has a point to prove and that ‘Disgusting’ is his way to prove doubters wrong.

So does Beartooth live up to the hype? To a degree, yes. His/their music efficiently covers the heavier side of the rock spectrum, with a consistent energy and hunger that allows each song to stand by its own, but at the same times adds to bigger picture of the whole record. Sure ‘Disgusting’ has the odd off moment that could be considered “filler.” Some ideas come off as unoriginal; parts of this record reminded me of Every Time I Die and The Chariot, but don’t let that put you off from hearing ‘Disgusting’. As a whole, it is a monstrous record that is powerful, hard-hitting and refuses to let you go from start to finish.

Are Beartooth the next big thing? Not quite, but if Caleb Shomo and his band keep up the momentum of ‘Disgusting’, then they’re heading the right way to be just that!

‘Disgusting’ by Beartooth is released on 9th June on Red Bull Records.