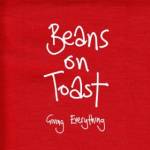 There’s something about Beans on Toast that I find oddly polarising. I’ve seen him live a few times, mostly supporting Frank Turner, and I generally quite like his song-writing style. Unfortunately, I find his singing voice massively grating, and it makes it hard to concentrate on a whole album without annoyance setting in after a few tracks. With that confession out there, I have to admit I still really like this album, even if I wouldn’t particularly want to listen to it on repeat.

‘Giving Everything’ is a brilliant summary of both the mundane and the important things in life. In thirty minutes, Beans on Toast touches on Prince Harry killing Prince William; the commercialisation of gig venues; not being able to get a gig at Glastonbury; post-festival blues; the government outlawing wanking; fracking; giving up cocaine; a brush with cancer; and his favourite guitar. The fact that in one breath he can be declaring “war is bad and killing is wrong” and in the next be talking about telling his doctor his cancer scare was caused by “smoking, fags and snorting cocaine” is a triumph in itself. This mixing of topics reminds me of Billy Bragg in a way, and it’s the blending of his everyday adventures as a working class bloke with the weighty contemplation of socio-political issues that warms me to him so much.

Simple and relatable, ‘Giving Everything’ is essentially a collection of songs written by your mate down the pub. While it may have been released at the wrong time of the year for me to fully emphasise with the ‘Post-Bestival Festival Blues’, if you rewind a few months it makes for the perfect September anthem. Both ‘Favourite Thing I Own’ and ‘Keep You’ are heartfelt ballads, though one is aimed at his guitar and the other at his girlfriend, I actually found the ode to Beans on Toast’s guitar more heart-warming. My favourite track is ‘Charlie’ a reggae-infused track about giving up cocaine that wouldn’t sound amiss on a The Skints album.  Songs like ‘Who Is Big Jeff?’ and ‘Sold Out Shows’ are wonderfully reflective of today’s music scene, and for a 30-something bloke who can’t get a gig at Glastonbury (his words, not mine), ‘Giving Everything’, has turned out to be one of the most refreshing albums I’ve heard this year (even if I can’t listen to it for too long). If you like Ben Marwood, Frank Turner or artists of a similar ilk, this album should shoot straight to the top of your ‘must have’ list.

‘Giving Everything’ by Beans on Toast is out now on Xtra Mile Recordings.