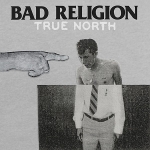 It goes without saying Bad Religion are one of the most influential punk bands of all time. With a career stretching 16 albums over 30 years, the California band have played a major way in shaping the way punk is today; not to mention guitarist Brett Gurewitz’s Epitaph record label has become one of the most reliable independent labels around.

So on to album number sixteen – ‘True North’ an album which is punk rock as you can be in 2013. Despite their age, Bad Religion still blast their way through relentlessly, yet do not offer much in variety; this isn’t expected by a band like Bad Religion.

Throughout ‘True North’ you’ll find common Bad Religion characteristics like the complimentary harmonies on ‘Popular Consenses’ and ‘Dharma and the Bomb’ which gives the album a sense of familiarity. Whilst the screeching guitar solo on the latter is another familiarity of Bad Religion releases.

On the whole ‘True North’ is consistent and clearly sees the band sticking to its roots; but on repeated listens you can’t help but think this diminishes the record, as some ideas come across as recycled. However there is energy and urgency that holds ‘True North’ together and stops it being completely forgettable.

It may not be the most memorable Bad Religion release but ‘True North’ certainly has the ability to expand their legacy and influence.