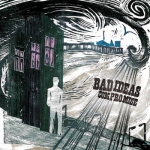 The last decade has seen a huge rise in folk influenced punk music, which has provided some great and wonderfully crafted bands and releases. However, like every trend this tends to eventually sour and become generic and full of recycled ideas which appear to be lifeless. This is where Leeds based quartet Bad Ideas come in, as they identify themselves as part of the minority of band’s still giving natural and fresh life to this genre of music with their debut full length.

‘Compromise’ is a product and the result of tampering with ideas and taking cues from heart on sleeve punk bands such as The Lawrence Arms and Alkaline Trio. Adding an element of their own making, Bad Ideas utilise a chemistry set of soothing gentle vocals, sincere songwriting and a beautiful steady folk influenced punk structure. Themes of self-reflection and the very personal are sung in such a heartfelt way that’s hard to deny that such a musical touch pulls gently on the heartstrings.

On the grand scheme, what counts are the little things that come across on this record, lyrical or musical, they are delivered perfectly. Whether it’s the short drum roll on

‘The Way Down’ or the instant swing from solo acoustic to full band on ‘No Secret; I’, every note hits the senses wonderfully. A definitive pinnacle of this sincerity is ‘Fake Teeth’; consisting of a very well written guitar line that is gentle and groans ever slightly, and a lyric like “already fucked by the things we have seen” seriously winds your mentality into submission.

Overall Bad Ideas constructed a very well delivered album full of honesty and integrity. Its folk ridden punk charm coupled with its soothing and reflective atmosphere is sincere to the touch and is the deal breaker to make newcomers become hooked by the band.

‘Compromise’ by Bad Ideas is out on the 1st May on No Reason, Shield, Fond of Life and Bad Mood Records.