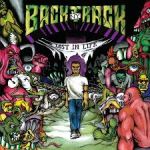 Hardcore punk is a simple game. There seems to be a tacit agreement amongst fans and artists alike that if you can prove your worth working hard on the road and that you can consistently channel a combination of high-intensity energy and riotious anger, you’re more than welcome to bro-down to your heart’s content. This often leaves a non negligible space for mediocrity to thrive and be celebrated. New York outfit Backtrack wander dangerously close to the cusp of being the another nth flavourless hardcore band on ‘Lost In Life’, were it not for some reasonable variety (let’s not kid ourselves, nobody’s claiming to be revolutionizing hardcore) and some genuine fun times.

In fact it’s all fun and games with opener ‘Their Rules’, a mid-tempo cycle of riffs and adolescent slogans. Nobody likes conformism, but if May ‘68 taught us anything, it’s that revolution should be more thoughtful than a couple of catchy slogans repeated endlessly until they, ironically, breed their own kind of conformity. That particular song is perhaps one of the better examples of how diluted and uninspiring hardcore can get. On the other hand, ‘Wash Away’ is an altogether more convincing beast, as the band transition from groove-heavy intro riffs to more conventional snare-genocide fare with conviction and righteous fury (and some weird-ass, punctual dual vocal work that works great).

The truth is a lot of what comes after represents minor variations on the same basic formula. Some of the tracks are resoundingly more muscular on ‘Lost In Life’, ‘Under Your Spell’ has hints of thrash, and there are a couple of rather meaty, and ruthlessly efficient, breakdowns to be enjoyed. That being said, the band’s adherence to the strict conciseness of traditional hardcore makes it a rather swift, and yes often repetitive, journey. Yet it’s an endearing particularity of hardcore that such familiarity is literally the lifeforce of hardcore fans, who will most likely find everything they need in this par-for-the-course effort. Were I to pick a highlight, I’d go for ‘Still Searching’, that seems to both have everything Backtrack build their music on and its anger turned up to eleven.

‘Lost In Life’ by Backtrack is out on the 14th January on Bridge Nine Records.