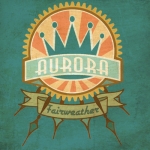 I’m always sceptical of Pop-Punk; it can go one of two ways, I either cannot stand it or I tolerate it. Luckily for Massachusetts’ four piece Aurora, this release is pretty decent, it is nothing mind blowing or ground breaking but it has parts which demonstrate a band with a lot of potential.

The first thing you will notice about this band is singer Sean’s distinctive vocals; they take some getting used to that’s for sure, in some songs they reach a pitch which I personally find uncomfortable in some places however combined with the group vocals in other tracks they work perfectly.

Opening track ‘The North Star Narratives’ is hands down the strongest track on this release, it mixes together the brilliant vocal harmonies, melodic backing, and frantic punk guitars. It is just everything I want to hear in this offshoot of the punk genre. With an opener oozing so much energy it sets the band up high for a great EP.

Unfortunately the release doesn’t keep up that frantic pace, tracks like ‘Cry Baby’ take a more mellow tone which is by no means a bad thing, I just wish they had a couple more tracks which swung more in the punk direction.

The issue of the high pitched voice becomes apparent in the final track ‘Little Traps’, it suits the song but it takes some getting used to as a listener, it is however another strong track which brings back that heavier punk influence and a blend of pop hooks and an epic ending which would sound great in a live scenario.

This EP shows a lot of potential, I love the more punkier influences and a fuller vocal presence but there is not one song which is bad; on the contrary if this is their first release then they have set themselves up for bigger and better things.

‘Fairweather’ EP by Aurora is available now as a free download on Bandcamp or Mediafire.